Out of the Frying Pan by Elouise East

Even though I was easily able to guess the plot twist, Out of The Frying Pan had endearing main characters, fun side characters and a sweet romance that carried you through the entire book. 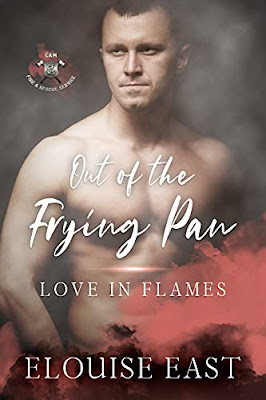 An MM romance about new starts and taking a chance.
When Dean was unwittingly outed as gay at his previous fire station, things became uncomfortable. So when he heard rumours of a station that welcomed everyone without exclusion, he jumped at the chance of a transfer. The trouble with moving was that he didn't know anyone, and he refused to become a burden by accepting daily invites from his boss. Finding Nourris Moi was a stroke of luck, and it soon became his haven.
Oliver's dream of owning a restaurant had come true, and after three years, he was finally turning a profit. Nourris Moi was his life, and he had no time for anything else - so he'd been told. When a certain firefighter became a firm fixture at one of his tables, the quiet and reserved newcomer caught his attention despite his determination to focus on his business. Someone strikes out at him, and he's left clinging to what could've been.
When everything appears lost, Oliver finds out who has his back and who doesn't.
Heather's Review:
First of all, Elouise East combined two of my character kryptonite - firefighters and chefs... that automatically makes me intrigued, but what follows is a really sweet story that I just couldn't put down today.   I love how the immediate attraction didn't turn into insta-love... they started slowly as friends and the book built towards lovers.  I also love that while I guessed the plot twist almost immediately, it felt more like vindication than an issue in the end.
Out of The Frying Pan was a great start to the Love in Flames series and I'm waiting with bated breath for book 2, Smokescreen (which I would have titled "Into the Fire" personally) which is Jason and Harry's story!
5 Stars ARC Contemporary Heather KU Romance Series