A human mafia prince walks into a paranormal city. No joke, just a phenomenal co-write from Brea and Wren with the story of Porter and his harem of paranormal partners. Mafia Prince by Brea Alepoú & Wren Snow features a MMMMM harem. 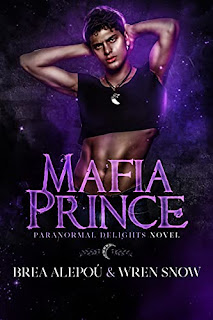 Being the mafia boss’s son isn’t a life of luxury.
Porter has spent every waking moment trying to stay under the radar. To mold himself to his father’s wishes. Even if it meant burying the feminine part of himself six feet deep.
When it all becomes too much, Porter takes the first chance he can to escape. But what’s a tortured and pampered mafia prince really know about the outside world when he’s spent so long trapped in his own home?
Lost and afraid in Silvercross City, Porter is in over his head. There are creatures here that could kill him with a single glance. But anything is better than running back home to dear old sadistic dad.
Broke and out of options, he turns to a caring dragon and lands face-first into the job of a host. Seduction, fantasy, safety. It all awaits him at Paranormal delights and four men who might or might not be exactly what he needs.
Mafia Prince is a full-length 125k standalone novel. Please read the beginning of the book for content and trigger warnings.
Red's Book Reads Review:
I love both authors books separately however I originally wasn’t sure about reading a collaboration however this blew me away. I adored how Porter was so sweet but had this core of steel when he needed and the dynamic with the different men was just amazing. I loved how each man brought a different element to the group however they found they worked together as a whole. Mafia Prince was so well written and some parts had me desperately wanting to find out what happens next. I can’t wait to read the second book in the series which focuses on other characters mentioned in this book. Absolutely loved Mafia Prince!
Rating: 5 Stars
5 Stars harem PNR poly Reds Book Reads Series Trigger Warning