This book has all the earmarks of a Hallmark style movie - the predetermined hate for an outsider, the insta-attraction that one MC fights, and the inevitable life changing decisions made within just a few days of knowing each other... 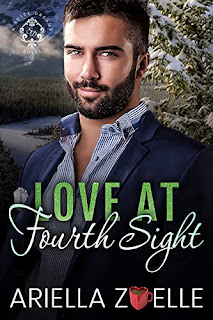 When Luca’s job brings him to a small town for business, he quickly discovers the magic of falling in love with a feisty local.
Luca Revello
As someone who grew up in the city, I experience some culture shock when I travel to the picturesque, small town of Wintervale to help an older couple launch their new ski resort. While almost everyone warmly welcomes me, I seem to rub the owners’ son the wrong way. While Albie seems determined to chase me away, his feisty nature makes him irresistible to me, despite our fifteen year age difference.
It may not be love at first sight, but by the fourth time we meet, I feel like I’m starring in my very own romantic comedy with Albie. Can the magic of a small town bring us a happily ever after worthy of the best schmoopy movies?
Albie Farnese
I want to hate Luca with everything I have. An outsider like him should have no business telling my family how to run our business. But instead of the stuffy, obnoxious know-it-all I expect to show up, Luca has the audacity to be charming, handsome, hilarious, and ridiculously perfect, making it impossible to hate him. Ugh, he’s such a jerk.
If I can’t hate him, I guess that means I have to love him for being the living embodiment of my dream boyfriend. The man even bakes like a master pastry chef! Who could resist a baking god? Certainly not me. Honestly, his only flaw is not being a permanent resident of Wintervale. But I can be very persuasive when it comes to getting what I want, so why should I let that pesky little detail stop us from being together?
Love at Fourth Sight is the third book in the Suite Dreams series and part of the Sunnyside universe. This novel features a small-town, insta love, age gap, opposites attract, gay romance. If you love cute sweetness, sexy fun, and no angst stories that will make you laugh and swoon, you’ll enjoy this satisfying HEA without cliffhangers. Each book can be read as a standalone or as part of the series in order.
Heather's Review:
I have to say that I almost DNF'd this book at 25% because Albie was such a whiney snot that I didn't really want to read futher...  I put it down and came back to it after a couple of days and luckily the insta-love was just around the corner.
I still struggled with the characters and the pacing of this book.  I liked Luca at the beginning - his quick mind and forthright behaviour were charming and endearing, but as the book went on I felt like he became more generic and less himself.  Albie was the opposite - a whiney snot who eventually grew enough to tolerate, but still written in a way that rubbed me a little bit the wrong way.  In terms of pacing, the leaps of logic surrounding the hotel business, the lack of continuity in the restaurant plans story thread and some of the relationship pacing had me picking up and putting this book down.
This book is schmoopy, and takes leaps of logic I couldn't always follow, but does have some fun elements and did keep me willing to read to the end once Albie stopped whining all the time..
3.5 stars Age Gap ARC Contemporary Heather