on October 21, 2021
Hell and High Water by Charlie Cochet is an intriguing start to a new series. The Happy For Now ending will leave you wanting more.
From the Blurb: 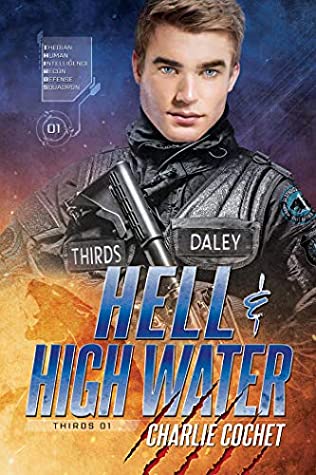 Action. Comedy. Romance. And that one weird guy.

When homicide detective Dexter J. Daley's testimony helps send his partner away for murder, the consequences - and the media frenzy - aren't far behind. He soon finds himself sans boyfriend, sans friends, and, after an unpleasant encounter in a parking garage after the trial, he's lucky he doesn't find himself sans teeth. Dex fears he'll get transferred from the Human Police Force's Sixth Precinct, or worse, get dismissed. Instead, his adoptive father - a sergeant at the Therian-Human Intelligence Recon Defense Squadron otherwise known as the THIRDS - pulls a few strings, and Dex gets recruited as a Defense Agent.

Dex is determined to get his life back on track and eager to get started in his new job. But his first meeting with Team Leader Sloane Brodie, who also happens to be his new jaguar Therian partner, turns disastrous. When the team is called to investigate the murders of three HumaniTherian activists, it soon becomes clear to Dex that getting his partner and the rest of the tightknit team to accept him will be a lot harder than catching the killer - and every bit as dangerous.
Red's Review:
I really enjoyed Hell and High Water and I wasn’t sure if I would when I first started reading it. Dax is hysterical at times and there were points when I had to put this down because I was laughing so much. Sloane is recovering from a tough loss and it was great to see how everyone helped him recover and how he worked through his issues.

Hell and High Water ends with a HFN but there is a deeper storyline that is ongoing and I presume this will be the theme that underlies the remaining books in the series. I will definitely check out the rest of the series now as there is so much more I need to know!
Rating: 5 Stars
5 Stars HFN Paranormal Reds Book Reads Sci-Fi Series shifter