on October 29, 2021
The book hangover is real... like all of the White House Men books, I dove head first into Heal, mostly because I've been waiting for Del's HEA ever since Sarah was murdered in a previous book, and I'm so glad that Issa is the man he's paired with!
From the Blurb: 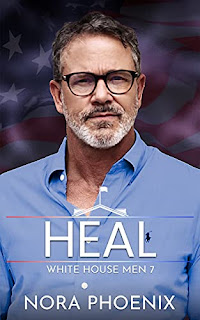 Del feels broken. Can Issa be the person to help him heal?
President Delano “Del” Shafer is grieving the loss of his wife, Sarah. Now that the culprits behind the Pride Bombing and all the killings are caught, everyone has been able to move on…except Del.
His friends have all found love. Even his son is happier than Del could have ever imagined. Yet he is stuck, unable to move past the grief, the loss, and the loneliness. He has the most coveted job in the world, but he’s tired of it all. If not for Issa, his twenty-year-younger body man, he wouldn’t even make it out of bed most days.
Issa, with his unfailingly sunny disposition, his infuriatingly stubborn optimism, his endless care for Del. Issa, who becomes the sole reason Del is still standing, is still smiling, is still clinging to the hope that things will get better. Issa, who is making Del feel again, laugh again, live again.
But can he also make him love again?
Heal is the last book in the White House Men series, a continuing MM romantic suspense series that needs to be read in order. It contains a sunshiney assistant, a slightly grumpy president, sweet hurt/comfort, an age gap, and the happiest of happy endings.
Heather's Review:
This book is the penultimate book in the White House Men series and is not meant to be read as a standalone.  You really need to read from the beginning (Press) to understand the interconnected story thread that is finally completed with Heal.  Throughout all seven books, Nora Phoenix weaves a carefully crafted suspense story while providing a different couple or throuple with their HEA each book.
In this book, all of the characters from the previous six books have chapters and scenes that bring us up-to-date with their situations, bot the main focus is on Del and Issa and their burgeoning feelings and the push and pull of want, need and duty.  I truly think that Nora Phoenix captured all of these stressors, as well as the characters innermost thoughts and feelings as well as you can on a page...
If you haven't taken the plunge yet, now is the time to just go ahead and binge the entire White House Men series and savor all 7 different relationship dynamics!
5 Stars Age Gap ARC Boss Grumpy/Sunshine Heather Hurt/Comfort Series