Got Me Wishing by Casey Cox

on October 04, 2021
I know when I open up a Casey Cox novel, I'm going to leave happy. I know that I'm going to spend the next few hours content and close the book with a smile on my face. Got Me Wishing does not deviate from the expectations that I've come to place on Casey Cox novels, though its a bit heavier than anything I've read from this author before. 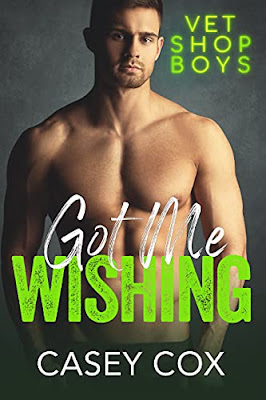 From the Author:
A half-birthday + a second chance = one true love? As. If.
Who needs a man when I've got cuddly kittens?
No one's ever wanted me once they discover my secret. I guess that's why I've thrown myself into my work as a veterinarian, as well as become the proud paw-rent to my eight cat rescues. I've even managed to convince myself I'm purr-fectly happy being single.
So when Bishop, a handsome stranger, strikes up a conversation, I don't expect it to lead to anything else. There's no way a guy wanting to start over is interested in love. So why has Bishop got me wishing for something more?
Sarah C.'s Review and Rating
Got Me Wishing is the story of Fulton, a vet at Vet Shop Boys with a penchant for all things cats and a quirky personality, and Bishop, a Los Angeles tranpslant looking for a fresh start. They meet at the park while Fulton is celebrating his half birthday. (He's a Christmas baby and we see early on that he has thoughts about this.) They end up going for a drink and sharing an intense physical connection - and then don't see one another for two months.
The real story picks up two months later, when they run into one another through a twist of fate involving a very cute dog. That is when they start to get to know one another and that immediate draw and connection they felt for one another starts to grow into something real.
The best part of this book was, as is the case with most Casey Cox books, the characters. Fulton and Bishop are both two damaged and flawed men who believe that their pasts cannot be overcome in the eyes of a lover. They both have hope for their futures and work to make their futures bright, but they are resigned to a future without that special connection. Fulton puts it that there is a difference between being alone and lonely. He's been alone most of his life, but he's never really been lonely. The depth of their individual traumas varies, but the fear that they won't find acceptance lingers.
Casey Cox does an amazing job with their trauma and with the overcoming of it. It is not immediate, especially in Fulton's case. Being loved by Bishop is not enough to rewire years of thinking a certain way, but it is a start. The automatic acceptance these two men have for one another, starting immediately in their first meeting, is beautiful and watching it grow as they get to know one another is simply beautiful.
The side characters - the other members of the Vet Shop Boys mainly - are just as wonderful and dynamic in this book as they were in book one. However, we get to see the relationship and friendship between Noah and Fulton fleshed out a little more. The found family aspect of this book is just chef's kiss. The friendships felt entirely believable and not just sprinkled in as an after thought to make the main characters appear more well rounded.
This book had a slight bit more angst than Casey Cox books usually have, while still managing to remain incredibly fluffy. The angst is not between the two men though, but within themselves. It is also a little less steamy than some of Casey's other works, but it fits perfectly for this couple and it didn't feel like anything was missing. I would highly recommend Got Me Wishing.
Rating: 5 Stars
TRIGGER WARNINGS: Discussions of addiction (including alcoholism), discussions of loss of sibling, mentions of animal abuse
5 Stars ARC Contemporary KU Romance Sarah C second chance Series Trigger Warning