Spellbound is a book with an interesting premise, but you should definitely read the series in order to enjoy it. You can see by our reviews which one of us has read both books in the series at the time of the review...

Can Cassius and Morgan overcome an elusive enemy and save a young girl’s life? 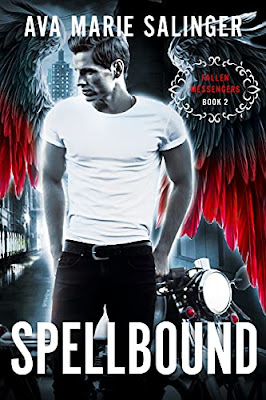 Eden Monroe has spent her entire existence believing she has no magic. Shunned by her mother Brianna and the magical bureau Hexa, she runs away from home when she is forced to embrace a future she never chose, only to fall into the hands of ghastly monsters from the Nine Hells. After being rescued by a mysterious Dryad with secrets of his own, Eden realizes there is more to her past and future than she could ever have imagined.

When San Francisco PD asks Argonaut to assist them in solving a series of strange bank robberies, Cassius Black and Morgan King uncover a disturbing plot that points to an unknown artifact hidden somewhere in the city. Their investigation soon has them crossing paths with a desperate Brianna, who seeks their help in finding her missing daughter. When the witch reveals the shocking circumstances surrounding her daughter’s birth as well as the deadly magic sealed inside the young girl’s body, the Argonaut agents realize their case is linked to Eden and the weapon of devastating power the bank robbers are after.

Can Cassius and Morgan defeat the malevolent organization behind it all and save Eden from her cursed fate? Or will the young girl suffer a destiny worse than death itself?

Spellbound is the second novel in the gay urban fantasy romance series Fallen Messengers. This is an MM paranormal adventure full of action, magic, snark, and a host of steamy angels and demons.

So, first I have to say I struggled a lot with this book in the beginning. When I requested this ARC I did not realize I should have read the first book to understand the continuing storyline. I definitely felt like I jumped in in the middle of the story.

Cassius and Morgan are definitely hot together. I originally signed up to read this one because… Two angels together? Yes please. So I was very confused in the beginning when Eden made a prominent appearance. I was worried that she was going to become a third in Cassius and Morgan‘s relationship and since she’s only 16 that was concerning. Luckily, that was not the case. But this book did read like two separate romances, one about Cassius and Morgan, and one about Eden and Cedric. I did find myself skimming a lot of the early chapters from Eden‘s point of view.

Overall the world building and original story idea of these supernatural beings was well-developed and easily pictured as I read. I would not necessarily call this a romance. It’s more of a paranormal or fantasy book with a dash of romance.

Heat: 5/10 (three sex scenes are well written, but didn’t add much to the relationship development)

Story line: 6/10 (taking into consideration that I have not read the first book I would definitely not recommend this one as a standalone)

World building: 7/10 (I assume a good portion of the world building occurred in book one but it was easy enough to follow in this book)

Overall: 8/10 (would recommend if you’ve read book one)

ARC Review – Awesome !!!  Just….Awesome !!!   This 2nd installment does not disappoint.  Full of action, funny moments, romance, suspense and steamy moments !!  I want to work with the team….they are hilarious !!  There are new characters who are introduced and fit in seamlessly with the ongoing storyline…..Spellbound was Awesome and seriously cannot wait for book # 3 !!!

To start at the beginning, read Fractured Souls: