on October 23, 2021
Jacqui joined our team recently and the first thing she said is I need to share my review of Ghost of Lies by Alice Winters... and since our team is all about sharing our love of books, here it is:
From the Blurb: 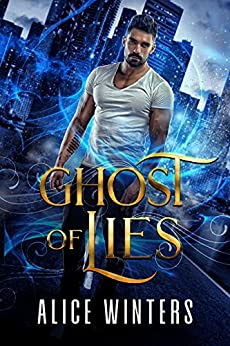 Hiro
Though I was born with the ability to see the dead, I struggled with it until my brother was killed and his ghost was left behind. Now, I’m determined to figure out who is responsible for his death… the problem is that Detective Maddox Booker, the one working the case, is a grumpy and stubborn man who wants nothing to do with me and definitely doesn’t believe in ghosts. It doesn’t help that I keep finding myself looking ridiculous in front of the detective, thanks to interfering ghosts who enjoy laughing at my expense. Still, the more I’m around Maddox, the more I realize that beneath that surly exterior is a kind and caring man who will do anything to help.
Maddox
When another man dies, I know we have a serial killer on our hands—the same murderer who has remained elusive for a year and a half. To add to my frustration, I keep running into Hiro at crime scenes only to hear him claim that he can talk to ghosts. The words of the dead could lead us to the serial killer and even tell us who is next, but ghosts? There’s no such thing as ghosts. Hiro is determined and charming, and no matter what I do, I can’t stop letting him get involved. He's definitely snagged my attention, but when he nearly winds up dead, I know he's getting closer to the truth—and if I don’t do something soon, he might be next.
Ghost of Lies is full of action, mystery, humor, and romance. Though more is planned for this couple, the mystery is solved and there is a happy ending.
Jacqui's Review:
I loved this!  Hiro can see ghosts, including the ghost of his murdered brother. Maddox is the police detective that is saddled with Hiro as he works as a consultant to solve his brothers murder.
So, I have trust issues and may have shouted "I knew it" at one particular scene only to have the rug pulled from under me. I don't know how Alice Winters does it, just I just totally didn't see that coming.
Funny, in true Winters style, but a more subdued humour. I think with the ghosts it could have been easy to be outlandish, but I didn't find that here. Sure there were moments of levity but it was used to break up heavier subjects.
Darker so trigger warnings for murder scenes and discussions around them. Also attempted murder, strangulation... Basically not all ghosts are nice or want to find peace.
Jacquie's Bio:
Jacquie spends her life buried in either books or cats, sometimes both. She can often be found wandering the Scottish Coastline. Mum of two, currently studying for an English degree. She keeps busy with a revolving schedule of writing, alpha and beta reading, reviewing, and supporting various communities.  She also masquerades as her alter ego, writer Jax Stuart.
5 Stars action ARC Jacquie mystery PNR Series