If you haven't figured out that Heather loves a good pony play story yet, you haven't seen my reviews of Stable Hand and Ponyboy.  She devoured the final (for now) Braided Crop Ranch book, Dark Horse in one sitting... and this time you also get a second opinion from Marie! 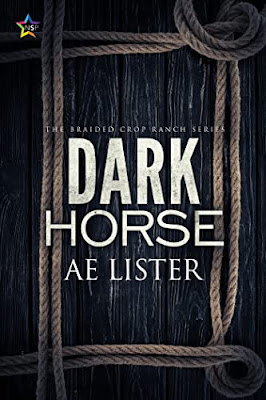 Adam Marsland has a plan.
He’s been managing the Braided Crop Ranch for six years and wants to bring everybody he can find back for a week of games, competition, and celebration.
Henry Swift was a ponyboy at the BCR during its very first year. He learned to trot, pull a cart, and submit to his trainer. He’s never quite left the experience behind and is excited to receive Adam’s invitation to return.
But it’s not only the Ranch and its sex-positive atmosphere pulling Henry back to the seclusion of the Muskoka wilderness.
Ever since their first frantic and lustful encounter in the woods, Henry’s had a thing for Adam Marsland and his memories of his tumultuous time on the ranch have haunted him for years. Adam’s still at the ranch, and now Henry can go back and discover if the older man has any regret for the way things turned out in the past.
But the gymkhana Adam’s planning means the return of a plethora of ponyboys and trainers and Henry wonders if he will have trouble reminding Adam how much they wanted to be together back then, and how possible it might be for them now, in the midst of the excitement and testosterone.
No one ever said love was easy, but Henry is determined to make the most of his chance.
Marie's Review:
This book was just wow.  Adam has had the ranch running for 6 years and decided to have a reunion instead of 6 weeks and the ranch they will be having  3 week show.  Henry was one of the 1st ponies and feel for Adam. Adam ended up breaking his heart.
We get to see their relationship in the past during his stay there. Kamal us back also had works his magic yo bring them together again.
I really hope this is not the end.  I would love to have more pony stories we have some more staff that could get a story I hope.
Heather's Review

Dark Horse was everything from Stable Hand and Ponyboy, but more!  It not only brings together Adam and Henry, but it revisits Noah, Luke and Jenson, Owen and Kamal and several other ponies who've been side characters in the books.

This book blends past angst and present feelings really well, and offers flashbacks to the very first session of the BCR.  I typically don't like flashbacks in books, but AE Lister crafts them as daydreams and memories and it fits flawlessly into the narrative.  This book is a beautiful second chance romance!

As with the other books in the series, I devoured Dark Horse in one sitting and I plan to re-read it again because I know there's even more under the surface that I didn't glean in the first pass.

This book sets the scene for a new generation of Ponies, Trainers and Stable Hands at the BCR and I hope that AE Lister will tell their stories again in the future!