on October 20, 2021
Laora has been read the Vargr series for us and is currently part way through the second book, Awakening Ember, which came out in September.  If you haven't seen her review of Slumbering Ember, the first book - you need to check it out and start reading it to be able to move on...  We are excited

Matt’s Sköll Hati pack has been forcefully merged with the Geri Freki pack on their territory. The many changes challenge all Alphas, who step up to meet the needs of their pack. It challenges the young Alphas to grow. With a whispering ember, Matt’s gaining new insight into the Alpha he’s growing into.

Steffen will die for his pack’s prosperity. Standing the only conquering Pack Alpha in all of Sköll Hati, he’s proven that once before. Having fought to secure his pack again, he relishes in prosperity and fights to grow it, despite the changes to their structure. A Pack Alpha never stands alone, though. Other than seeing Matt rise to a challenge, Steffen’s focus on prosperity brings a new possible ally to their doorstep.

Frederik rose to have black fur, and he’s since been renamed Hati. But he’s not doing well with fame. He yearns for something he doesn’t know and dreams of freedom he doesn’t understand.

Then he feels the pull of a new Alpha. All the fame and expectations that smother him seem bearable with the feel of that Alpha. And Hati needs him!


Laora asked some of the characters questions about themselves to highlight the series as a whole:
Steffen: Would you have done things different when you challenged /taken on Ulrik and his supporters in hindsight?

Answer:
Yes, I wouldn’t have let my old Pack Alpha survive. I’d hoped his poison could never harm my pack again, but…it did, and the realization that I failed a pack member from doing that is making my ember burn me into action. But Ulrik is dead from age now, and there’s no action to be taken there. Matt, though? An ember burns in that young pup because I made a mistake. He should have just been a pup and grow slowly into the Alpha he can be, not…thrust into an early ember, and I feel responsible. Ulrik never got it. My way made us prosper, but he was never the kind of Alpha who could understand it. I let him live to see that I did better. That I was right for challenging him on behalf of my pack, but…he never got it, and I failed a pack member in the hope of gaining my biting Alpha’s respect. I mourn that I ever felt the need for that.

Matt: What do you think will bring your ember more under your control?

Answer:
I don’t know. I still don’t know what it wants from me. I kinda fear it because an ember reacts to what an Alpha has to take action against, and mine burns me from…well, from being too young to do anything about something like that.
I love reading about history, and I know the carnage that happened during World War Two, so that my ember wants me to take action when reading about that frightens me. What could be coming our way frightens me. But I’m not afraid for me. My ember will carry me through it, and it’ll slumber once I’ve lived up to my Alpha’s purpose. I fear for my pack, my parents, all the pups…
I know I don’t stand alone, though. No Alpha of Sköll Hati ever does. Our pack will be well protected.

Rebecca, Lillian and Michael: How is it in the community from a human standpoint? What are the greatest plus and minus points?

Answers:
Rebecca: The greatest plus is the community. The Vargr are an extremely loyal and caring race. I remember I fell in love with that when I first met Rolf. I felt so…empowered there.
Lillian: I wish I’d have met the pack like Becky did, but I’m okay with the surprise learning of the Vargr. The Pack Alpha can be as subtle as a brick, and that was one helluva wakeup call! But he’s been really good at asking the right Vargr and mates to help us acclimatize.
Rebecca: Yeah. The biggest surprise is the fighting. And the biggest minus. I never saw that when I was first introduced to the pack, not knowing they were…well, werewolves. Now? I still have trouble with it, but far from as much. I see how they bond from it. Watching my son in fights like that, only to sit in comfortable silence, leaning against the pup he’d just been fighting, is strange.
Michael: What I love the most is that humans get to be humans and have their own needs tended to when they aren’t the same as Vargr needs. Lillian and I are kinda long-term guests in the pack, and we need some alone time. We love the pack and communal building, but they are a far more social race than we are on our most social of days.

Rolf: What do you miss from your Omega life, if anything?

Answer:
Absolutely nothing. Omega is a time to be reminded of the luxury of being in the pack hierarchy. Being outside it hurts. Being an Omega is a punishment. I was one for so long that the communal building still seems like home, and I do love spending a lot of time there. But I have Becky and Matt now. I have my first bond.

And now for what you've been waiting for - the new cover of Whispering Ember: 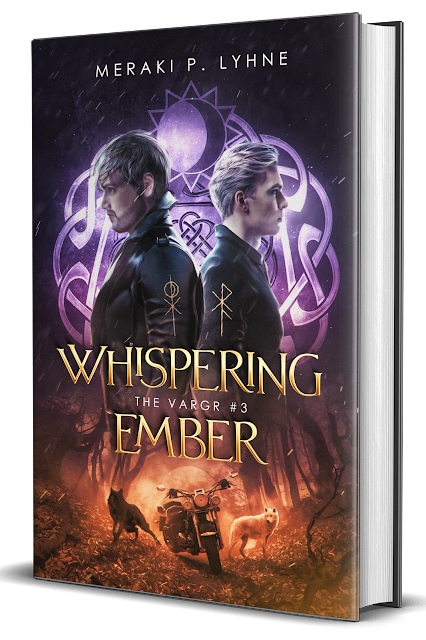 What do you think?  Isn't it gorgeous?
Keep up to date on all the Vargr news by connecting with Author Meraki P. Lyhne:
Meraki P. Lyhne on social media @MerakiPLyhne
Links: www.linktr.ee/merakiplyhne
Patreon: https://www.patreon.com/merakiplyhnedark
(Early reveals or exclusive content like outtakes, extended scenes, random short stories from series with both main and secondary characters – often hot, Christmas cards, Discord, and loads of other fun stuff)