***The Closer Than Blood Anthology has been removed from Amazon at this time.  TL Chris has posted that their story will reappear in January in a new private bundle on Smashwords.  I will update when I hear from any of the other authors about plans to publish their stories again.***

To get a behind the scenes peek at the Closer Than Blood anthology, you may want to check out the Release Blitz and Giveaway post by clicking here. 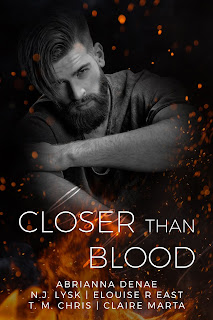 Are you ready for 4 taboo stories about men who are Closer Than Blood?

It’s all about brotherly love, even if it’s His Brother’s Brat.

These are men for whom family and romance are Entwined.

And yet, who can resist When Fantasies Collide?

But remember that love can get messy and lead to Mutual Destruction.

Grab this anthology to dip into your taboo side.

The Reviews: We had five members of the review team read Closer Than Blood and here's what each of us thought:

I really enjoyed Kieran and Ash, their struggles and pain before they come together is well written and heart wrenching.  I was cheering for them to find their well deserved happiness after everything they both went through.
Great character development, great connection between the twins, perfect amount of angst and struggles.

I’m not generally a fan of father son stories, but I have read a couple I’ve enjoyed.  I didn’t really feel the connection between Rhys and Adrian.  And the blackmail felt a bit contrived.  Not my favorite in the series, but still good.

I did not enjoy this story very much.  The writing was skilled, but there was no HEA, Nate was completely excluded from his brother’s relationship with no resolution for him.  I had hope that at least Jayden and Jude would get their HEA but that didn’t happen either.  I was very frustrated when I reached the end.

I adored Kael and Simon, their book was sweet and well developed. I definitely felt the connection between them and their struggles to accept their feelings for each other.  I loved Simon’s protective instincts towards Kael, even against his own father.  Highly recommend this one!

Autumn's Review and Rating: 5 Stars
Closer than blood contains a collection of novellas where there us taboo love. Between brotherly love, uncle and nephew, and so much more." "I  love reading collections as they always give me an inside look at some authors I haven't found yet.
I cant wait to see what these authors will have in store for us later.
Bookish.jka's Review and Rating: 3 Stars
This was a quick read for me, really nice actually, inbetween some really chunky, heavy reads.
I struggled to rate it because this is the first anthology I've read, and obviously I preferred some of the stories to others. I've given it a 3 star rating overall, mainly because each novella was really too short for me to form a proper view on.
It's made me realise that anthologies probably aren't my jam, unless they include some of my favourite authors whose writing I already know and love.
Ultimately I need the full story, with all of the character development and background and world building that goes with it. These novellas really just felt like a chapter within a book to me.
That said, if you like taboo m/m romances and quick 'n' dirty reads, then this is the anthology for you 😈.
Heather's Review (Rated each book separately)
Book one - Mutual Destruction by Abrianna Denae & Claire Marta
Twincest Kieran and Ash - 5 stars

Twincest has always been a go-to taboo read for me and Mutual Destruction had it in Spades!  I love that the authors took us into each twin's mind and developed the characters, even within the space of the short story.  Their mutual need and trauma draw you in and their relationship is captured in the short space of this story.

I loved 90% of this story.  I loved the way that they came together, the mild angst and definite pull between them and the fact that Rhys seemed to take the reins in the relationship.   I also appreciated the HEA.  What took me out of the main story was the blackmail and the best friend side story.  I also felt that the other friends introduced in the book were great at the start and then an afterthought when wrapping up the book.

I went back to this story a few times because I struggled with it.  As I said, a good twincest is my jam, but this book wasn't that for me.  I found the author's attempt to write teenagers somewhat pedantic and almost irritating.  I couldn't find the depth or the relationship dynamic growing and as my colleague mentioned, they don't get any form of HEA and the story feels more than incomplete.

This story gave me the feels, in a good, kinky taboo kind of way.  I love how TM Chris takes the insta-attraction and feeds it little by little, wearing down Simon's resistance to having a taboo relationship.  This story had just the right balance and ended with a steamy bang (literally).

If you're looking to dip your toe into Taboo waters and see if this style of book is for you, an anthology like Closer Than Blood is a great way to see if one or more taboo works for you, or as some of my fellow reviewers have said, you could just grab it for the quick and dirty reads...

Red's Book Reads - 3 Stars
This collection of 4 taboo romances was a bit of a mixed bag for me. There were a couple of stories that I enjoyed and some that just didn’t work for me. The stories did feel a little too short for me and I would have liked for them to have been longer and more developed as they felt a little rushed.
If you like a short and dirty taboo read then these will hit the spot though.
Anthology Autumn Bookish.jka Heather Multiple Reviewers Reds Book Reads Taboo Tammy