By The Red Moonlight by Amanda Meuwissen

on October 06, 2021
By The Red Moonlight by Amanda Meuwissen is an amazing story featuring a variety of shifters, a seer and a vampire. 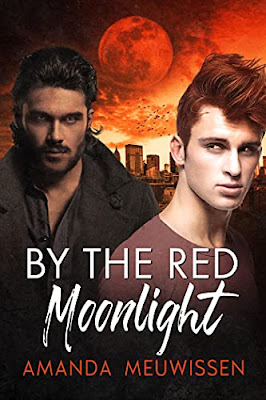 Alpha werewolf, crime boss, and secret Seer Bashir Bain is neck-deep in negotiating a marriage of convenience with a neighboring alpha when a tense situation goes from bad to worse. A job applicant at one of Bash’s businesses—a guy who was supposed to be a simple ex-cop, ex-con tattoo artist—suddenly turns up undead.
A rogue newborn vampire would have been a big wrench in Bash’s plans even without his attraction to the man. After all, new vampires are under their sire’s control, and Ethan Lambert doesn’t even know who turned him. When Bash spares his life, he opens himself up for mutiny, a broken engagement, and an unexpected—and risky—relationship.
Ethan just wants a fresh start after being released from prison. Before he can get it, he’ll need to turn private investigator to find out who sired him and what he wants. And he’d better do it quick, because the moon is full, and according to Bash’s prophecy, life and death hang in the balance.
Red's Book Reads Review and Rating;
I found the description of this book interesting which made me want to read it but I was surprised just how much I enjoyed this book. The romance between Bash and Ethan wasn’t the main focus here and for me that helped the story develop more and helped you understand the characters better. I am hoping there are more books in this series as there are so many characters I want to know more about! This was a really good book and I would recommend it to anyone who loves a paranormal romance.
Rating: 5 Stars
5 Stars PNR Reds Book Reads shifter vampire