Becoming Built is the second book in the Built for You Series.  I am so glad that Emmett is getting his HEA!  This book could be read standalone, but I think you'll get more from it if you read the books in order... 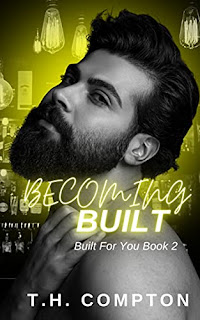 A story doesn’t need a villain when you are your own worst enemy.
Emmett
I shouldn’t be jealous of my best friend’s relationship. Can’t I just be left alone, but not lonely? I used to run my bar and felt on top of the world. In pain and partially paralyzed, I am not the man I used to be. Honestly, I am downright miserable, trapped in a cage of my own making and the only man that’s shown any interest in me for years works for me and drives me crazy. I know I have to make changes and start to live again, but I’m terrified.
James
Another new start with a new job along with some very inappropriate thoughts about my new boss. He is grouchy and gorgeous with his crooked smile. I know he thinks being with me would be a mistake, but I think some no strings attached fun is exactly what he needs. I never stay in one place long, but being around him makes me want to put down roots and have him tie me to the tree.
Becoming Built is a contemporary MM Romance with a bar owner who hides from everyone including himself and a fun loving slightly kinky bouncer who wants to spice up his bosses life.
This book involves a main character with a severe case of Bell’s Palsy, suffering from social anxiety, depression, and has compulsive tendencies. His case has permanent facial paralysis and pain, though not all individuals with Bell’s Palsy experience the same. Love may not fix all, but it can fill the heart.
Join the employees and patrons of Built Bar as they find love for themselves and each other in the Built for You series.

Becoming Built was a good, solid story that showed research, empathy and depth, and is a solid follow up to Beautifully Built.  I enjoyed meeting James and getting to know more about Emmett and reading their story.  The world building and descriptions easily place me in Built, the apartment and the rest of their worlds, and it was great to see the characters from Beautifully Built and Bold Beginning again...

Emmett has a potentially insurmountable barrier to relationships in his mind - Bell's Palsy - along with a host of fears triggered by a past relationship's response to his disability and it's the primary focus of the book...

I understand the large and overwhelming nature of what TH Compton is trying to convey, but for me, the book doesn't have the same spark and forward motion that Beautifully Built did and I spent the book struggling to find it.  I liked both characters in and of themselves and I appreciated that James was willing and interested to get to know Emmett, both with his limitations and because of it, but I found that the sparks I wanted were never fully realized.  What I did love were some of the truly creative approaches to the relationship that James thought up...

Becoming Built was a solid 4/5 for me.  While it doesn't have the overwhelming je ne sais quoi I was expecting, I did find a story that made me smile and I'm so glad Emmett and James found their HEA together.

"Now I was under no illusion. His love wouldn’t fix me. I wasn’t some princess in a casket waiting for a kiss. I was still going to have all my pain and problems, but I might have someone to help me weather them and live life as full as I could in the good moments." -Emmett

This was a new to me author and I was drawn into the story. I did had not read the first book in Built for You series, but did not have the idea I missed plot information.

The story has a nice flow and the storyline seems pick up pace later on in the book.

I really appreciated that the author seems to have done a lot of background research on the subject of Bell's Palsy and the resulting problems and struggles which the character of Emmett encounters in his life. He is a co owner of the Built Bar where James is a new employee who has a strong attraction to Emmett. When they hit of they have to find a way which works for both of them. This is a contemporary story and I am looking forward to catch up with the already released and upcoming books in the series. Becoming Built story has a hea/hfn.

Triggers apply: chronic illnesses, read the information by the author.