If you've read my review of XOXO, Fisher, you know that I have always enjoyed the Princess Pen Pals series from A.W. Scott.  I love that the stories contained fully formed, well rounded characters and the group interactions are always sweet and that is even more apparent in XOXO, Grayson. 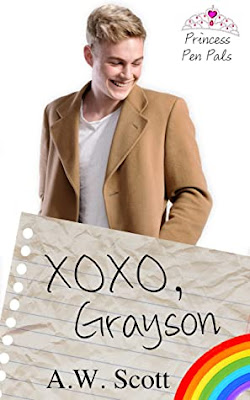 “You can’t write a code for love…”
Grayson was not what most people expected. He didn’t think or function the way other people did. Some called it social anxiety, but his family knew it for what it was - he was far too brilliant for his own good.
And with brilliance, comes responsibility. Sometimes that responsibility is too much for Grayson to handle. That’s when he transforms himself into Gracie - his alternate princess personality.
Shiloh lives and breathes his construction business. He has to. With no family to back him up, he is a self-reliant man hell-bent on forging his own success.
When said business leads him to a new group of friends, he discovers there’s more to life than concrete and sheetrock. With his eyes opened to new possibilities, Shiloh comes to the conclusion that maybe new and different isn’t so bad after all.
Can Grayson and Shiloh find their own version of happy? Will the Gracie side of Grayson send Shiloh running, or is it just the thing he never knew he wanted?
This story features a tech-savvy middle longing for someone to understand him and a carefree construction worker searching for his own version of happily ever after.
This is not an ABDL romance, however, due to a medical condition there are scenes that contain certain elements related to that lifestyle and to age play. XOXO, Grayson is an MM Romance designed for readers 18+.
Heather's Review:
As I said above, one of the things I love most about these short stories is how fully formed the characters are - Grayson is a functioning adult who holds a good job and still likes to regress to Gracie or Gray as a part of himself.  Shiloh is the character who needs to find his place and name his kinks and that in and of itself endears me to the book, because it doesn't automatically assume that Shiloh wants to be a Daddy.
A.W. Scott has once again proven to be a master of this length story - there's nothing missing, there's nothing extraneous, it's like Baby Bear in Goldilocks and the Three Bears - just right.
While once again, XOXO, Grayson can easily be read as a standalone, knowing the side characters histories from the previous books will enhance your reading pleasure, so I do recommend starting at the beginning of the Princess Pen Pals Series with Aster's book.
5 Stars Age Play ARC KU Middle novella Romance Series