Worth Trying By Chloe Young

A bad decision and a meet ugly changes the course of their lives forever... See if Sarah C. thinks Worth Trying is worth trying... 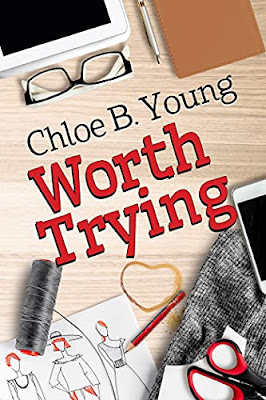 No strings attached is easier, until love tangles things.

Privileged playboy Innes Kent has been unmoored since his regular escort quit on him. Though he’s a talented lawyer at a successful firm, without the distractions of a gorgeous man and frequent sex, his mind often wanders in unpleasant directions. For instance, toward his estranged daughter and his many regrets therein.

Charlie is a budding fashion designer, but the need to support his unwell mother has left him scraping to get by. When his cleaning job sends him to a lavish office one desperate night, he’s overwhelmed by the excessive luxury he sees, and when Innes catches him thieving, he’s at the lawyer’s mercy.

But Charlie is just the distraction that Innes needs: a proud and determined scrap of a man who challenges him, annoys him, and attracts him all at once. The perfect choice for a personal assistant who won’t bore him to tears or run screaming from his bad temper. Working together leads to sleeping together, but they're both too clever to mess up a perfectly good arrangement by getting feelings involved. Aren’t they?

Chloe B Young is a new to me author, and I will definitely be going back to read the first Without Precedent novel. Her writing hooked me from the jump, diving right into the not so traditional way that Innes and Charlie meet. The way she introduces the characters gives us a great way of knowing who they are and what they value before we're even out of the first chapter. By the time they ended their first interaction, I was rooting for them and I felt like I had an understanding of these characters, an understanding that grew deeper as the book progressed.

And my understanding of these characters definitely deepened as the book progressed. Chloe does an amazing job at characterization in this book. Every single person, from Charlie's mother to Innes's estranged daughter Mimi to a random client who exists for just a few pages and is never heard from again feel three dimensional and have their own voices. I really felt as if we were peeking in on a section of these characters' lives and watching them unfold.

The actual romance in this book is very slow burn, and it makes sense for Charlie and Innes and the way they are presented. Instead, we spend a lot of time watching the relationship between the two men develop into something more, and it works really well. The chemistry between them is palpable from the start. I was beyond ready for them to just kiss already by the end of their first interaction, even though that would've been a very bad idea.

This book has a moderate level of angst from our main characters, but its not really about their relationship. They are more angsting about various parts of their life that neither really have any control over.

I highly recommend Worth Trying. It was a very enjoyable read that I didn't want to put down.