The Destination Daddies series has brought us a wide range of daddy/boy combinations and Trulli, Madly, Deeply by JJ Harper brings us the younger daddy, older boy trope. 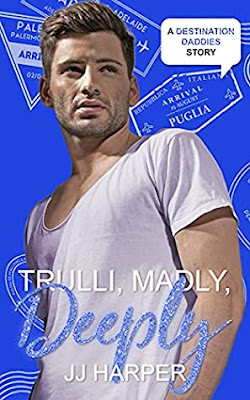 One week under the scorching southern Italian sun. Is it enough to find out there’s someone for everyone? One older, resigned little and a belligerent lone Daddy doubt it.
Rowan escaped to Puglia to work through his grief of losing his husband by rebuilding a derelict cluster of the region’s heritage buildings. His friends told him he was stupid and quickly dropped away, leaving him to complete the dream he’d shared with Christof.
Three long years later, the Trulli Cupido are ready for guests, adults with the same penchant as him: exclusive holidays for Daddies and their littles or boys. But he doubts he’ll find himself another Daddy; he’s too old now. Until he walks in, and hope soars in his chest.
Ethan can’t believe he’s let himself be talked into a holiday by his best friend. Being a lone Daddy on a holiday for couples is going to be a disaster. The brilliant white cone-topped villa is stunning and romantic, but the chance of finding a little will be slim to none. But he never expected his host, the most beautiful man he’s ever seen. Could he be the one for him?
Reds Book Reads Review and Rating: 5 Stars
This is a really sweet low-angst story of an older boy with a younger daddy which is something I find we don’t get to see that often but I think is really sweet. Ethan is a younger man, living in the UK and Rowan is an older man who was widowed a few years previously and lives in Italy running a holiday resort which is part of the Cuff’d Destinations promotion. I was a little concerned when I first started reading this book but it does move fairly quickly and my fears were short-lived. I liked how the two characters interacted with each other and with the other characters within the book. I also enjoyed the fact that whilst there was a slight drama to the storyline, this was short-lived and resolved fairly quickly. It also made a change to go beyond the initial break as well and it was fun to see how the relationship developed further outside of the initial break.
Heather's Review and Rating: 3.5 Stars
I typically love reverse age gap daddy books - they're probably in my top three tropes, but honestly it was barely a mention in the story and never actually explored - it was just stated - "I want..."
Beyond that, there were some issues for me - it was all super sweet and low angst until 'the climax crisis' which was seriously overblown and unrealistic and honestly if this wasn't an ARC I probably would have DNF'd the book right there.  (I will mention that some other members of the review team here actually did DNF the book).  I also had some issues with the pacing of the book and the abrupt transitions.
So why did I keep reading?  Beyond it being an ARC, I did find the pairing of Rowan and Ethan sweet and I hoped for big things in the last part of the book.  I found just enough to hold on, but not enough to truly be able to recommend this book to everyone.
If you're looking for an escape from reality and a cotton candy daddy story, you may find that Trulli, Madly, Deeply is what you want, or you'll be like one of my fellow reviewers and put the book down before you throw the kindle at the wall...
3.5 stars 5 Stars ABDL Age Gap Age Play BDSM Contemporary Daddy KU Multiple Reviewers Reds Book Reads Review Team Romance