Just because I recently reviewed Stable Hand, doesn't mean it doesn't qualify for #ThrowbackThursday - a chance to read an excerpt from an already published book!

So without further ado, let's look back at Stable Hand, which was originally published in November 2020: 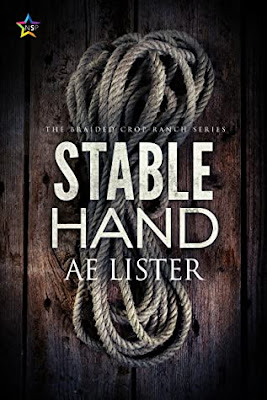 "Book One in The Braided Crop Ranch series. BDSM/MMM/Erotic romance.
The Braided Crop Ranch is looking for stable hands. But this is no ordinary horse ranch. They cater to men with a certain interest. An interest involving harnesses, tails, and trainers.
Managed and expertly run by registered psychologist, Adam Marsland, the Ranch is a safe place for the expression of sex positive and kink positive needs and fantasies.
Jensen Moriarty is desperate for a job. He can handle horses. In fact, he’s a pro at it. Too bad the BCR doesn’t deal with real horses. But they do have “ponies”.
If Jensen can wrap his head around what the BCR actually stands for, he may have the opportunity to expand his resumé and experience something completely unexpected in the process.
~ A BDSM cowboy story about men who like to play pony, and the trainers who indulge them."
An Excerpt:

"The grooming barn sat about thirty meters away from the arena, slightly smaller but painted the same bright-red color. All the buildings were so clean and new. They looked like horse barns but with no smell of hay or manure, or animal. It was taking me a long time to acclimate.
When I got to the nearest door, I grabbed the metal handle and pulled. Three of the men from the bunkhouse were right there, in the act of undressing.
“Wrong door, cowboy,” Trey said.
Noah regarded me with an indulgent smile. “Stable hands go in the other entrance. Marked door’s around back.
“Thanks,” I muttered, flustered, trying not to stare at Noah. God, he was cute.
I closed the door. Only then did I see it was marked PONIES. Would I ever get used to this place?
The other door marked STAFF was around the other side of the building. God, I could be such an idiot. I took a deep breath, and pushed this door open a little warily, in case I came upon anything else unexpected.
This side of the grooming barn looked spacious and airy, with wide polished pine boards over most of the floor. There was a tiled section at the far end with three evenly spaced showerheads and a narrow doorway to the changing area I’d unwittingly stumbled upon earlier.
As I stood there, taking this in, Callum came through the doorway completely naked and walked calmly to stand beneath a showerhead. He winked at me before crossing his hands behind his back and inclining his head. Although I’d expected this to happen, the sight of a naked man in my vicinity was a shock to the senses.
“Good morning, Jensen.”
I tore my gaze from the naked man in the shower stall and met that of Liv, whose eyes sparkled with amusement. She leaned against the corner of a broad table, dressed in black leggings, flip flops and a tank top. “Did you sleep well in a bunkhouse full of barely contained testosterone?”
I removed my hat politely, rubbing the edge of the brim with nervous fingers. I nodded. “As well as can be expected, I guess.”
Liv grinned. “Yeah. I’m happy I get to miss all the shenanigans and dick jokes. They’re much better behaved here.”
I tried to concentrate on Liv as Trey and Noah came through the doorway, also naked. Noah shot me a sweet smile before putting himself in place.
“They’re such good ponyboys,” Liv cooed.
They sure were pretty. The Braided Crop Ranch knew how to pick attractive men to play ponyboy; that was for damn sure. The BCR wanted to attract paying guests to watch the spectacle and their ponyboys needed to be fit and healthy in order to fulfill the physical demands of performing. Whatever the performances entailed, they would probably be similar to a regular horse show. Running, jumping, pulling carts etc.
I decided I should stop trying to imagine the ponyboys I knew doing those things.
Excerpt From: AE Lister. “Stable Hand.” Apple Books.

I have two series on the go at the moment (The Braided Crop Ranch and Persuasions), with another series (Northern Horizons) starting in March 2022.

Stable Hand is the first book in The Braided Crop Ranch series (published November 2nd 2021). Ponyboy, book 2, followed in April of this year and Dark Horse, book 3, comes out October 18th. Persuasions began with Various Persuasions in March and is followed by Various Distractions on December 28th.

More information can be found at my website: https://www.aelister.com/ or in my Facebook group: https://www.facebook.com/groups/thebraidedcropranch
ThrowbackThursday is a weekly feature on MMRomanceReviewed.  Each featured book will have been published at least 6 months ago and is an opportunity for authors to shine a light on previously published works - if you want to participate, please fill out this form.
#ThrowbackThursday