#TeaserTuesday - Exclusive Excerpt from A Little Crush by Elouise East

So excited for a new Elouise East book on Thursday - A Special Love, Book 2 in the Just A Little Crush series is available for Pre-order now, and will be on KU when it releases!  And Elouise is sharing an exclusive excerpt with our readers!

Let's start with the blurb: 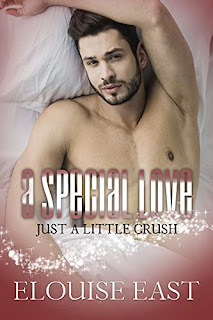 A low-angst, MM romance about having the patience to wait for what you want… and need.
What happens when you add a vet, a shelter worker and a gorgeous Pug named Spencer?
As a vet, Heath interacts with many people, but no one who could become more. Every date or relationship he has had fizzled out. He wants someone who enjoys the same things he does and who doesn't feel like hanging out with him is a chore. Everyone tells him to be patient, but he’s fed up with waiting.
Moving to an area where he knew no one is perhaps not Rory’s best idea. He jumps at the opportunity to escape the disappointed looks he receives daily from his parents. Four hundred miles later, Rory needs to find some friends. As much as he is happy with the company of the dogs at his shelter, he needs more.
Can they find what they’re looking for?
Did that whet your appetite???
Here's the exclusive excerpt if you're ready for more:

He won’t be a chore to have around if you choose him as the main vet for the shelter,” Carlton commented when he passed by the office later that day.
They had been crazy busy for most of the morning and early afternoon when two of their staff had reported in sick. Rory usually kept the shelter at five staff and him, so there were always enough people to cover in case of emergencies. With less staff, it had meant Rory had to postpone his paperwork until then. The paperwork needed for this shelter was the bane of his life. If he’d known the amount he had to do, he might have second-guessed accepting the job.
Probably not, though.
“He seemed like he knew what he was talking about. It would be good to bring someone on that we can go straight to instead of having to ring around for whoever is available. And he’s local,” Rory agreed.
“He’s also not bad to look at.” Carlton’s eyebrows waggled.
Rory snorted. “Yeah, all right. Keep your libido in check, Australia. I don’t want this one to run off.” He gave him a mock frown and shooed him away. “Haven’t you got work to do?”
Carlton’s booming laugh trailed behind even after he left the room, and Rory chuckled. He was right, though. It would not be difficult to have someone who looked like Heath around occasionally. His close-cropped auburn hair showed off the vast array of freckles on his tanned face and neck. He was large but not overly muscly, just enough to manhandle the animals he looked after. There had been two beaded bracelets wrapped around his wrist, giving him an almost earthy appearance. Rory couldn’t explain what he meant by that, but it was a word that seemed to fit Heath.
When he laughed, the crinkles around his eyes showed a life full of humour and joy. Something that was severely lacking in Rory’s.
The paperwork would not write itself, so he turned his attention back to the figures. The manager’s position had come at the perfect time for him. His sister had just married an asshole, and despite Rory’s proof that the guy was, in fact, a cheating shit, his sister didn’t want to know. So, instead of making life more difficult, especially when they’d moved next door to their parents, Rory did the next best thing and used the excuse of finding the perfect job somewhere else.
He had no qualms with his parents, he just knew they would back Aggie regardless, and he didn’t need that in his life. He was enough of a disappointment to them as it was.

,
Okay, I'm sold - who else is adding A Special Love, Just A Little Crush Book 2 to their TBR right now?  If you can't wait, why not grab He's Behind You, book 1 in the Just  A Little Crush Series for only $2.99 and read it now! 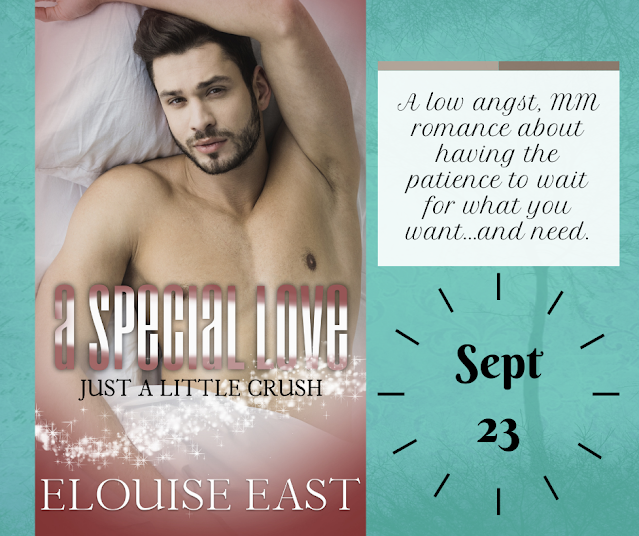 A little bit about the author:
I am Elouise East but feel free to call me Elli. I write sweet and steamy connections in gay romance. I also touch on taboo stories under the name Elouise R East.
Books that tell the stories where friendship and family are the focal point - be it blood family or chosen - is very important to me. That’s why I include a variety of personalities, talents, ages, situations and abilities as I believe a story needs, or a character needs. I want my characters to be real, to be relatable, to be free to have whatever views they tell me they have. And trust me, most of the time, I do not have any say in the matter!
My characters come to life on the page for me as well as my readers. Their stories unfold in front of me, and I have very little input into how they want to be shown. Just like real life, the lives of my characters change with every choice, every interaction and every conversation. And I wouldn’t have it any other way.
I write books that are emotionally realistic, even if liberties are taken with other aspects of my stories. I don’t know any other way to write. It comes from deep inside.
Who am I? A single parent to two children who make life worth living. An avid reader who still devours every book she can get her hands on. A student of learning about any subject that takes her fancy. An author of books she would read herself. And a romantic at heart who loves anything cheesy.
Who’s in?
Once again, A Special Love is available now for pre-order and will release on KU Wednesday!
#TeaserTuesday