In the spirit that I have a few days to recharge before diving into next week's ARCs, I grabbed another book that has been on my TBR since August and dove into Stronghold by Ana Ashley! 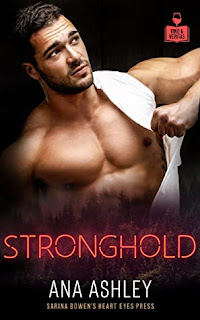 A second chance at love? Or a second chance to ruin everything?
When Skyler spots the new bartender at Vino and Veritas, his body responds before the guy even turns around. But when he does, it takes only a heartbeat for recognition to set in and for sparks to fly. Judson’s been gone for ten years, but he’s the man Skyler never forgot. Or forgave.
The last place Judson wants to be is back home in Burlington, living with family. Not so long ago he was a world-class chef with the lifestyle to prove it. Now he’s serving drinks and flying under the radar until he can get the hell out again. But when his childhood best friend reenters his life, looking finer than any entree at a five-star restaurant, he wonders if it’s time to update his menu of life choices.
Working through past wounds with Skyler won’t be easy, though, especially with family obligations--and the occasional dairy cow--interfering. When their loyalty is tested, will their newly built stronghold be sturdy enough to withstand the storm?
Stronghold is a sweet and sexy Vino & Veritas romance with some creative use of maple syrup.
Heather's Review:
When a misunderstanding is the catalyst for a 10 year silence between best friends, you know that the sparks will quickly fly in one way or another when they see each other again.   Skyler is blindsided when Judson returns and Judson is still nursing open wounds too.   I love the pace Ana Ashely sets for the reveal of all past hurts and also the parallel new relationship that is forged between Skyler and Judson.
This book has all the feels - some anger, some resentment, some lust, some love and so many emotions in between.  The secondary dramas, including Skyler's family issues blend into the book and round out the story and the characters - you see their motivations and expectations change throughout the book and it's beautiful to see.
Well paced, well spiced and just mapley sweet enough, I highly recommend Stronghold if you're looking for a friends to lovers, second chance romance.  The only thing missing are the yummy recipes!
5 Stars Contemporary Friends to Lovers KU Romance second chance Series