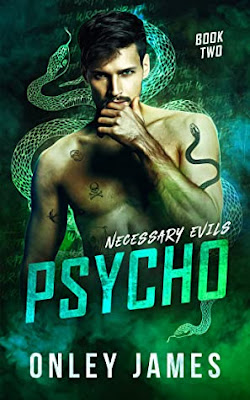 We are so excited to have Reds Book Reads sharing her second review with us and it's Onley James' Psycho (Necessary Evil #2) - what an amazing read.

"Psycho is a fast-paced, thrill ride of a romance with an HEA and no cliffhangers. It features a psychopath hell-bent on romance and a disgraced FBI agent attempting to redeem himself. As always, there’s gratuitous violence, very dark humor, and scenes so hot it will melt your kindle. This is book two in the Necessary Evils series. Each book follows a different couple."

August Mulvaney has always been exceptional. As the genius son of an eccentric billionaire, his off-putting behavior is often blamed on his high IQ. They say there’s a thin line between genius and madness. August is both—a brilliant professor loved by his students and a ruthless, obsessive killer tasked with righting the wrongs of a failing justice system. And he’s just found his latest obsession: Lucas Blackwell.

Lucas Blackwell was once the golden child of the FBI, using his secret talent as a clairvoyant to help put away society’s worst. Until, with a touch, he discovers his co-worker is a killer and his life falls apart. Now, the world thinks he’s crazy and that co-worker wants him dead. He seeks refuge at a small college, hoping to rebuild his life and his reputation. But then he runs into August Mulvaney. Literally.

August is immediately intrigued with Lucas and his backstory. He doesn’t believe in psychics, but there’s no missing the terror in his eyes when they collide in the hallway. Now, August has a problem. Lucas knows his secret, and August knows he wants Lucas. And August always gets what he wants.

Can he convince Lucas that not all killers are created equal and that having a psychopath in his corner—and in his life—might be just what he needs?

Psycho was another fabulous book by Onley James. I loved Unhinged which is the first in the series and this instalment just picked up where Adam and Noah left off. August and Lucas are both university professors with a secret. August is part of the Mulvaney family of vigilantes and Lucas is an ex-FBI agent with psychic abilities. The relationship between these two is just amazing and I love how August is both terrifying and endearing in equal measure. I also loved that we got to find out a tiny bit more about the elusive father figure and hope we know more about his plans and motivations by the end of the series. While this is a stand-alone story, you would benefit from reading them all - and not just because they are amazing books!
Both Unhinged (book 1) and Psycho are available on Kindle Unlimited!
Reds Book Reviews Bio: 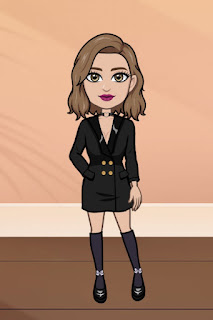 I absolutely love to read and spend most of my free time with my face in a book. My family always mock me as I tan quite easily but always have a white face as it’s been hidden from the sun by my book! I read a wide range of books over all different genres but MM romances will always have a place in my heart. The reader community is so accepting and open and I have learnt a lot about myself with the support of the amazing community that has been built.
So, if you want to know a bit more about me, I work full time and live in the UK with my husband and have a wonderful stepson. I feel I was probably a cat in a previous life as I like nothing better than to curl up in the sunshine. Unfortunately, living in the UK means I don’t get that opportunity all that often! I always swore I would never get a kindle as “you can’t feel or smell the books” but now you won’t find me without either my kindle or the kindle app on my phone as I love how quickly and easy I can get to a book!
5 Stars ARC Dark Reds Book Reads Romance Series suspense