Anyta Sunday has once again hit it out of the park with the latest book in her Love Austen series. 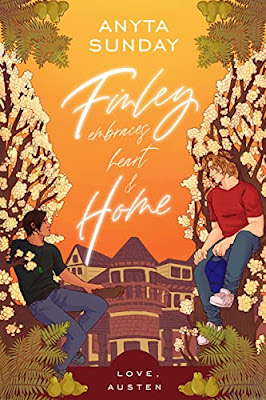 MUM is the love of his life.
Until he meets his STEP-BROTHER.
For years it’s been just Finley and Mum. Now she’s getting married, and they’re moving into a flash mansion and his step-dad is lording it over him. He’s clearly a homophobe, and doesn’t want him rubbing off (so to speak) on his son.
Like that would ever happen.
Even if Ethan and his dad don’t look anything alike.
Even if Ethan and his dad don’t act anything alike.
Even if . . .
This can’t happen. They’re whānau now, family, there are boundaries.
Secret. Forbidden. Irresistible.
A reimagining of Jane Austen’s Mansfield Park.

"Finley Embraces Heart and Home is the story of Finley and Ethan, starting when they are fifteen and spanning into their early twenties. They meet when Finley and his mom move into Mansfield, the estate Ethan and his father share. Their parents are engaged and looking forward to them all being one big happy family. Finley is determined to not get along with Tom (Ethan's dad) or Ethan himself, but Ethan is simply too kind for that to happen.
He wavers within a week.
From there, we have a story spanning years as these two boys go from strangers to friends and then fluctuating between friends and lovers in a will-they-won't-they slow burn that leaves you thirsting for more. This book is moderately high angst, but the angst is very well deserved and amazingly well written. There are several scenes that made me tear up and one scene in particular that had me actually crying - which is not an easy thing to do for me with books.
Finley Embraces Heart and Home also had a bit more steam than some of the other Love Austen books, with their relationship turning physical a bit sooner than I would have thought while still managing the will-they-won't-they aspects. The side characters of this book were good, though I kind of found some of them to be a bit annoying at times. The most grounding part of this book though, aside from our lovely main characters and their relationship, was the redefinition of family over the course of the book.
Finley Embraces Heart and Home was amazing and I definitely recommend."
Finley Embraces Heart and Home is currently available for preorder and will release on September 13th, 2021
Bonus - Check out Sarah C.'s Booktok about Finley Embraces Heart and Home
5 Stars KU Romance Sarah C Series