Yet another amazing series has wrapped up... and this time I have been anticipating the story and how it would progress, since throughout the first three books, Blake has remained resolutely straight and then he gets his Encore... 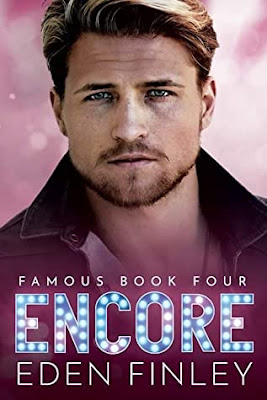 BLAKE
Never make a bet with Jordan Brooks. That’s how I’ve ended up here, doing a movie that risks my entire acting career.
Taking on a gay role when I’m straight is problematic in its own right, but when production gets put on hold, and a fabricated story breaks out in the media, Jordan and I have to go into hiding.
Our livelihoods are put on the line all because of an ill-timed photo and Jordan’s bitter ex-boyfriend.
Scandals, lies, and PR nightmares. Welcome to Hollywood.
JORDAN
Why am I always drawn to the straight ones? You’d think I’d learn my lesson, but when our movie is delayed, I repeat old patterns.
My plan to bury my hurt and anger toward my ex by “method acting” with Blake Monroe is foolish. But Blake is as irresistible as he is good-looking, and he settles into his role easier than I thought he would. In fact, he likes it a little too much.
There are too many PR problems hooking up with Blake for real would bring, especially when the media thinks he’s the reason my relationship fell apart. Yet, I can’t walk away from him, and it seems, he can’t walk away from me either.
My Review:
It all starts with a lost bet which triggers an amazing and funny journey for Blake and Jordan.  I honestly think these two have become my favourite couple out of all four Famous books and they not only have chemistry, but also develop a deep friendship that is amazing to read.
Probably my favourite funny scene includes this interchange:

“All the straight guys want to suck my dick after kissing me.”
That’s actually …pretty believable, even if it’s conceited. I look up into Jordan’s eyes and swallow hard. “I have to say, if a straight guy would rather suck your dick than kiss you, I don’t think your lips can be too magical.”

Encore is incredibly well paced, with enough will they/won't they angst and external forces to make the story interesting and keep you glued to the page, but you'll also LOL regularly at Blake, Jordan and the other antics that happen to the side characters.
Encore is a fitting wrap to the series and offers a send off that makes me want to go back and re-read the entire thing all over again :)   I will miss the guys from Eleven and their crew, but I look forward to the next world that Eden Finley takes us to!
5 Stars ARC bi awakening KU Romance