Burning Season is the third book in the Wild Ones series, but I have read it as standalone. 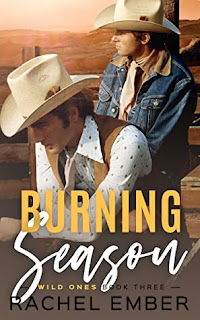 The year is 1972. Dylan Chase is nineteen, and most days he’s lucky enough to ride a tough bronc, have a beer with his friends, and maybe even sleep under the stars on his family’s third-generation cattle ranch.
Dylan’s life would be perfect if it weren’t for his forbidden itch. An itch he’s only scratched once… with Bo, a hitchhiker he never thought he’d see again. When Bo shows up as the new hire at a neighboring ranch, Dylan is sure his almost-perfect life is about to implode.
After the calves are driven out to the spring pastures, Bo will move on to California. Dylan just has to hold it together until then… if he can.
But Bo can soothe a restless horse with a touch and keeps a battered book of poems in his saddle bag. And the more Dylan learns about him, the more he wants Bo—and the less he wants Bo to go, damn the risk.
Heather's Review:
I honestly was thrown a little bit by the continual reminder of the dates at the start of some of the chapters.  I know that this reinforces a time and place for the reader, but for me it interrupted my flow and I found myself breaking away from reading to acknowledge the date, particularly since some days took multiple chapters and others were single days.  I understand why the author chose to do it, but it didn't work for me.
I was a little bit worried going into the book that I'd find a lot of historic stereotypes and language, but the author managed to avoid most of the more active issues and just allude to homophobia most of the time.  The characters themselves and the landscape around them were beautifully described and I could easily picture myself on both ranches and even during the rodeo where Dylan rode a bucking bronco.  The story has moderate angst, what you'd expect from a period story, and good flow.  If you like a good cowboy story, than you definitely need to add Burning Season to your TBR!  I do not think I was missing anything by not reading the first two books in the series.
4 Stars ARC Romance Series