Land on Me by Matt Corr

on September 02, 2021
Matthew R. Corr's young adult coming of age story, Land On Me, hooks you from the start. It is a must read for anyone who loves Young Adult novels.
From the Author: 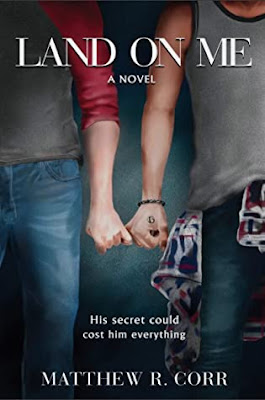 Landon Griffin has everything going for him. He’s a high school senior on the brink of receiving a football scholarship, his dad is running for mayor of Madison, Texas, and his future with his girlfriend looks bright. But his simple life shatters when feelings spark for a guy he’s never met. Giving the stranger the codename Mystery Boy, Landon hesitates to step out of his comfort zone to solve the mystery. Living in a conservative town, he struggles to hide his new obsession while trying to figure out where he fits within the spectrum of sexuality. Can he dodge the constant questions from his friends and find answers before the escalating anxiety becomes too much to handle? Land On Me is Matthew R. Corr’s debut novel akin to the drama of Christopher Rice and the coming-of-age brilliance of Alex Sanchez.
Sarah C's Review:
"Matthew R Corr's debut novel, Land On Me, had me hooked from the first moment. His main character, Landon Griffin, is incredibly affable but has all the idiocy one might expect from an eighteen year old kid who doesn't really know up from down. Our other MC is a complete mystery to him at the beginning and he fills in the blanks with little things he learns, rumors he hears, and his own judgements that he creates in his mind just watching him in the hallways of their school. Watching him reconcile the person that he believes his Mystery Boy to be with who he actually is was simply adorable.
The characters in this book, both our main characters and the side characters, are all deeply interesting. Landon and Caleb hold my attention and there are so many times when I want to just reach into the book and give Landon a hug or a smack on the head. Landon's girlfriend, Lauren, and friends, Tasha and Steven, are well rounded and dynamic characters who pop off of the page. His best friend, Dan, feels a little cliche, but having grown up in a small conservative town, I recognize that some things are cliche for a reason. I knew at least three people like Dan growing up.
Corr makes good use of dreams and flashbacks to show us a little more of what is going on beneath Landon's surface. The vivid dreams and daydreams appear frequently on the page, showing us more of Landon's overactive imagination mingling with his personal anxieties about everything he is going through at the moment.
Land On Me is low steam due to the young adult genre and has a fair amount of angst. However, this angst is well balanced by the fluff and by scenes that had me literally laughing out loud - especially when Landon attempts to go on a well known dating app. This book has a lot of heart and I cannot wait to read the sequel. "
TRIGGER WARNINGS: homophobia, violence, gun violence, drug usage, underage drinking, death of parent, physical abuse/domestic abuse (off screen but mentioned)
About Sarah C.

"I have been reading since I was two years old, due to an incredibly bad speech impediment that had me starting speech therapy very young. That got resolved (and now I barely shut up), but it instilled in me an absolute love of reading. It is a love that never faded. I don't go anywhere without my Kindle and post reviews on Amazon and Goodreads. I got into MM romance on accident, choosing a book from netgalley that I went and reviewed and then discovered Gay Romance Reviews and fell deep into the rabbit hole of which I never plan to escape.
Outside of reading, I live in Kentucky with my husband, cat, dog, guinea pig, and daughter. She's also a budding bookworm. I work in software support for a software development company. This allows me to travel for work, letting me visit places I likely would only dream about visiting otherwise. Besides reading, I love writing, playing around on photoshop, watching terrible television shows, and spending too much time at my computer chatting on Discord with friends.
I am also a member of the LGBTQ+ community and tend to engage primarily in queer media - which is another way that I stumbled upon MM romance because I was only reading queer books on Netgalley. I love supporting indie authors and light up when given the chance to read a new to me author. "
5 Stars Trigger Warning YA