All the Queen's Men by Chara Croft and Harlowe Hayes

As soon as I heard how All The Queen's Men came about, I knew I had to add it to my TBR and get it out to share with all of you ASAP, and Tammy agrees with me, so here are our takes on this new Chara Croft and Harlow Hayes mash-up: 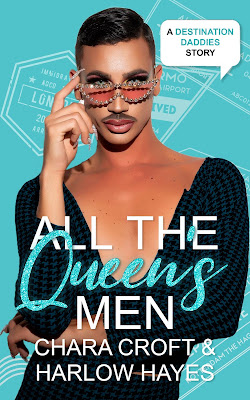 From the author:
When your bestie is too shy to go after what he needs, the obvious answer it to drag him along as your fake boyfriend when you’re hired as entertainment at a swanky London hotel. And no, bitch. That’s not just my way of sneaking in the chance to finally kiss his sweet lips before I find him the Daddy he needs.
Isaac:
Secretly being in love with your best friend isn’t just dumb, it’s hopeless. How do I know? First, because this is real life, not a romance novel. Second, because Jules is fabulous, and I most definitely am not. And third, because he’s trying to find me a Daddy. And Jules? Jules is definitely not Daddy material.
Roman:
The job offer from a rival finance firm would have been an automatic no for me, if it hadn’t come with a kinky carrot. Hell, who am I kidding, it’s still a no. I’m happy where I’m at, content with my life in New York City, and have no interest in living in London. But flying out to take a look can’t hurt, especially since the old friend who’s trying to get me to come on board with the company dangles that carrot in front of me: an all-expenses-paid weekend at a swanky hotel, sponsored by the kinky dating app, Cuffd. Because the one thing New York is missing is a boy of my own.
Jules:
I’m too much for most men, but their loss. If they can’t handle my fabulousness out of drag, meeting Diva D. Light is guaranteed to send them running. The one man who adores all of me is my bestie, and yes, bitch, I’ve thought of going there. I can’t do it to him, though. He’s shy and sweet and pure as the driven snow, if you catch my drift. He deserves someone who can take care of him, and I don’t just mean finally popping his ass cherry, which is totally not my thing. Isaac needs a Daddy, and since I’m selfless like that, I’m going to make it happen for him… even if Diva D. Light wants to scratch someone’s eyes out at the thought of giving him up.
All The Queen's Men is a fabulous m/m/m Daddy-kink romance with too many cherries, the perfect amount of boys, and an excessive number of platform boots. (Just kidding. There is no such thing as too many pairs of platform boots.) This book is part of the Destination Daddies multi-author series. Each book can be read as a standalone, but there are so many destinations and Daddies to discover, why not grab them all?
Heather's opinion:
OMG!  I can't believe this story was almost never written!  If you follow Chara Croft in her Facebook group, she shared this story with us:

Babes, I did a thing. 😈
As many of you know, once upon a time, a friend of mine offered to write a quick little novella to fill my original Destination Daddies release date (September 9) when it became clear I was going to need a little more time to wrap up All Dolled Up for you.
Well, they helped me out, so I offered to help them right back. They've never written Daddy kink before and started a brand-new pen name, Harlow Hayes, to try it on for size... and I offered to advise along the way.
Plus, Harlow and I? We've been talking about writing drag queens together for years. 😆😆😆 #somuchfun #probablytoomuchfun #butnowiwannadosomemore...
Anyway, let's just jump ahead to the oops: instead of me just advising, we accidentally ended up doubling the word count that Harlow was originally shooting for, co-writing the whole damn thing, and having a motherfucking blast along the way.

That alone made All the Queen's Men a one click for me, but Chara was sweet enough to slip me a little preview so we can regale you with how wonderful this new partnership is - and by that I mean we desperately need more Harlow/Chara writing pairings, but I digress and I haven't even told you why I love this book...
I love the guys!  I mean I love all the guys I read, but these characters were just so loveable - the Diva Queen, Jules. who rocked his sass and his ass, which hid the vulnerability, need to be loved and the love he already had within, the sweet, shy virgin, Isaac, who was also desperate for love and guidance, both from his sassy bestie and his future daddy... and not to be left out, Roman, who was looking for a boy who balanced shy with sass, and finds out he really needs to be a daddy to two sweet boys!
I love the pace!  BDSM books usually have insta-connection - you need to quickly develop trust in a limited time and you either click or you don't - I love how the tension of new situations was built in this book - the decisions and pacing were so on point!
I love the relationship - the way the puzzle pieces of each man's character fits the relationship and dynamic.  Plus, I love the heat!!!! This book will melt your kindle if you're not careful, but balances the fire with some very sweetly loving BDSM - this book has loving daddy written all over it - spanking, a little edging and some excellent 'daddy voice' paint just the right picture!
If you can stand the heat, you'll want to put All The Queen's Men at the top of your TBR pile and just one click it now...
Tammy's Take:
How hot are Isaac, Jules, and Daddy Roman?  Umm, well… you should probably keep your fire extinguisher handy.
I might be bias because I love everything Chara Croft writes, but I never know what to expect when one of my favorite authors teams up with another author that I have not read yet. I’m happy to report that in this case it is absolutely worth reading!
I love the way Chara writes shy, nervous virgins.  They’re always so stinking adorable!  And Isaac is no exception.  His reliance on Jules to help him, protect him, and ultimately defend him if necessary is so sweet.
Jules fierce over-the-top personality works well in his friendship with Isaac.  Both boys love each other so deeply. Jules doesn’t see how they can make it work because they’re both bottoms and Isaac just doesn’t think Jules looks at him like that.
Even if Jules thinks he’s setting up this rendezvous with a daddy to help out his best friend we all know he loves Isaac too much to trust a stranger with his treasure.
Of course Daddy Roman knows exactly how to handle both boys and he’s happy to take on the task.
I adored the development of the relationship between the three of them.  The hissy fit that Jules throws when he thinks Daddy Roman has hurt Isaac is epic. The result is definitely not something Jules saw coming.  I loved the whole story; read it in one day actually, and it definitely goes in the reread pile!
MC development: 10/10 (Each of the three main characters definitely had a distinct voice and personality)
Heat: 8/10 (pretty high heat, as I expect from a Chara Croft book)
Length: 8/10 (never long enough, but still ended in a logical place)
Meet cute: 9/10 (Great set up for the story, relationship, and characters)
BDSM: 9/10 (well written and sweet)
Overall: 10/10 (would highly recommend)
5 Stars ARC BDSM Daddy Friends to Lovers KU MMM Multiple Reviewers Romance Series steamy Triad