Are you looking for a sweet rock star romance with some fluffy angst and redemption?  Look no further than Whiskey Dreams by Sam E. Kraemer. 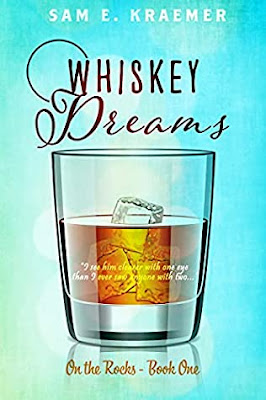 He’s got rhythm while his new man’s got a record. Will history destroy their ballad, or can two beautiful souls sing in tune?

Country music star Kelso Ray Anderson found the passion he craved in his songs. Rejected by his religious family because of his sexual orientation, he regrets his painful visit home just before a massive European tour. But when he encounters his brother’s handsome friend who was his adolescent crush, he’s captivated by the melody stirring in his heart.

Tanner Bledsoe’s hopes were broken in prison. Determined to make the most of an opportunity offered by an old high school buddy, he never expected to blush like a teenager when he’s re-introduced to his pal’s magnetic brother. Falling hard and fast for the striking musician, Tanner’s terrified his wrongful incarceration will be a devastating deal-breaker.

Hellbent on giving their budding relationship a chance despite his looming international concerts, Kelso pours his musical soul into his troubled new man. But Tanner is torn apart by the agonizing choice between a once-in-a-lifetime love and doing what’s right to protect his partner’s dreams.

Will their undeniable spark find its place in loving harmony?

Whiskey Dreams was sweet, had just enough heat and follows the budding relationship between two men who crushed on each other when they were younger and got the chance to be together as adults.  Kelso is the charge ahead, make everything sweeter kind of guy that Tanner needs to help him recover from unimaginable trauma in prison for wrongful conviction.

This book has all the elements to make it a fantastic read, but there were parts that just didn't grab and hold my attention like other books and I can't put my finger on exactly why - but I did really enjoy the read and recommend you check it out!

Whiskey Dreams, On the Rocks is the touching first tale in the On the Rocks M/M contemporary romance series. If you like captivating characters, sweet attractions, and tortured choices, then you’ll adore Sam E. Kraemer’s delicious escape.