The Gentlemen of Emerald City - Bryce by L.A. Witt 5 Stars

I have been following L.A. Witt's The Gentlemen of Emerald City since the series began with Luca in June and have loved every minute of these stories - exclusive high priced escorts who find something more when just the right person comes looking for their services...

In the third installment, we meet Cole's (book 2) friend Bryce - a brand new escort and his very first client - Alec, the lead singer of a very successful rock band and a man who craves intimacy without commitment but also hates change... 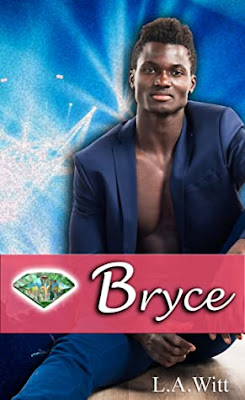 I don’t do love. I don’t do relationships. What I do is tour with my band and enjoy the life we worked so hard to earn. When I’m home, my favorite escort is always happy to join me in bed.

Except he’s not an escort anymore. He has, however, hand-picked someone to replace him. I’m dubious because I hate change, but I’ll give this new guy a chance.

And I will not fall in love with him.

This escort gig is seriously intimidating, and the last thing I expect is for my first client to be a literal rock star.

No, scratch that—it’s the second to last thing I expect.

How fast and hard I’m falling for him.

Of course because the relationship starts out as escort/client the sex comes first and the relationship second, but that's what makes these books fun and special at the same time... This third book was a definite change of pace from the first two novels in the series which revolved around more experienced escorts and the hockey players who claimed their hearts.

I absolutely love Bryce as a character - from his nervousness to his genuine heart and his understanding of Alec, I fell a little in love with him right from the start...

Alec took longer to warm up to for me, but as details about him emerged, the wounded songbird also captured my heart.

Bryce can definitely be read as standalone, but characters from Cole make cameos and Bryce relies on Cole for mentorship and advice, as well as continued friendship.

I have loved all of the L.A. Witt books I have read to date, but honestly Bryce is probably my new favourite!

The Gentlemen of Emerald City

Bryce is Book 3 of The Gentlemen of Emerald City, a sexy series centered around the high class, high-dollar Gentlemen of Seattle’s most exclusive escort service. Each book is full of snark, sass, and sweetness, and like any Emerald City client, you’re guaranteed a happy ending