Not So Nice by Emma Lyon 4*

This was my first chance to read anything by Emma Lyon - Not So Nice is the third book of four in her The Real Thing series, but I feel it can easily be read standalone. 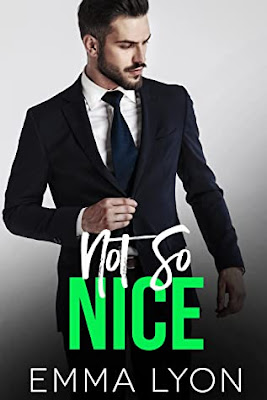 Being in unrequited love sucks. Especially when he’s a jerk. And a billionaire. And your boss.

For the last year and a half, Nathan Graham has been the bane of my existence. Demanding. Unpredictable. Stupidly handsome. As his personal assistant, I’ve been part of almost every aspect of his life. I’m the one sending apology flowers to his one-night stands. The one he calls late at night. The one wondering why I was dumb enough to fall in love with someone who will only ever see me as his assistant.

I’m not sure how much more I can take. Especially when he involves me in his convoluted plans. Fake dating? Worst idea ever. I only wish I didn’t secretly like it so much. But being in love with Graham is the surest path to heartache I know.

My reputation is keeping me from closing the deal of the year, and to get what I want I have to show how committed I can be. Putting my personal assistant Ryan forward as my boyfriend at an upcoming tech summit should do the trick, even if it’s fake.

The only problem is Ryan. Because lately I can’t stop thinking about him. He’s always been my kryptonite, whether he knows it or not, but I know I’ll only end up ruining him. There’s a reason I don’t do relationships. I can’t afford to let my feelings for him stand in my way.

Then again, I’m a brilliant handsome billionaire boss. Why can’t I have it all?

In a tale as old as business, a handsome billionaire concocts a fake relationship to impress a potential business partner and falls into a trap of his own making when he falls for his PA, but has never been in a relationship before... cue the issues...

This was a well crafted book and I always love a good boss/PA story but it was missing something in the angst - as Nathan's PA, Ryan should have been more in tune with the business Nathan was handling and the angst could have been drawn out in a different way.  I also found myself wanting more arguments - they both would start talking and drop things... which I guess is kind of a difficult one for me...

That being said, there was a great level of steam, some on the fly travel and a HEA, so if you're looking for a fun read that brings the boss down to earth, check out Not So Nice by Emma Lyon.