All You Touch: A Love Starts Here Novel by E.M. Lindsey - 4 Stars

Sometimes being an ARC reader is a lesson in patience - I honestly may have DNF'd All You Touch because at 25% read, the MC's had still not met each other, but when you agree to ARC, you agree to give a book a thorough look so I kept going and boy did I love the second half of the book! 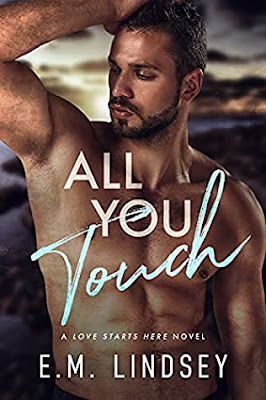 He was the best thing that ever happened to him...in the worst way.

West Balkany lived his life by one rule: make your own luck. And that means fighting his slum lord when his building starts falling apart, forcing himself to finish school no matter how much he wants to quit, and most importantly, never do something as stupid as falling in love.

Unfortunately, that last part isn’t so easy when his gorgeous one-night-stand who dragged him into a bar supply closet and made him see god, keeps turning up everywhere he goes.

But he doesn’t have time for Jake—no matter how much he wants to. His father’s health is failing, his deli is barely getting by, and now he’s facing a massive legal suit against Larsen Property Management for trying to kick everyone out into the streets. He also knows that Jake is hiding something, and he’s pretty sure whatever it is, it’s enough to turn his life upside down.

But Jake also makes him want to try, and that’s what scares him the most.

Jakob Larsen spent his life running from the man his father always wanted him to be, but that all comes to a stop when the man announced he was leaving LPM. He finally has a chance to prove to both his brother and to St. James that he can turn Larsen Property Management around and do something good for the people his father has been tormenting all these years.

The problem is, he’s just not quite sure how, when no one trusts him to do the right thing.

And it doesn’t help that Jakob has found himself distracted, falling for a gorgeous, stoic deli owner who has no idea who he really is. All Jakob has ever wanted was to be truly loved, but now that he’s found the one person he could see himself growing old with, he has to face the truth: everything they have is based on a lie.

Will he ever be a man worthy of forgiveness, or will he have to face the fact that everything he touches turns to dust?

It's a little bit funny that I wrote the intro to this post and then went back to look at my review of Without A Doubt, book one in the Love Starts Here series, and I said in that one that you needed patience to find the amazing love story... and you need it again here.  I'm going to come back to this thread in the future because I really want to look at the subjective nature of my reviews and the headspace I'm in when I review, but that takes us off topic!

All You Touch is the second book in the low-angst, humorous, steamy series, Love Starts Here. I love that both characters are at points in their lives where they are questioning who they are as individuals and neither one of them is looking for a long term romantic partner!  The heat level, once the characters meet is off the charts and the tension comes from Jake hiding his connection to the Larsen name  I also love the interactions of the characters with the side characters - Rhys and Carter from the first book, Henrik, Jake's brother and of course West's sister and parents!  It really fleshes out the story and makes the world they live in that much more interesting.

I struggled with the rating for All You Touch, mostly because once I was immersed in the second half of the story I was a goner, but unlike Without A Doubt, I struggled to engage in the first third of the book and whether that's me or the story, my rating is 4 Stars.