Another winner from Megan Maslow!

There is so much to love about The Demon's in the Details.  Even if you’re not familiar with the tale of Rumpelstiltskin, which I wasn’t, if PNR is your jam, this book will definitely satisfy that craving! 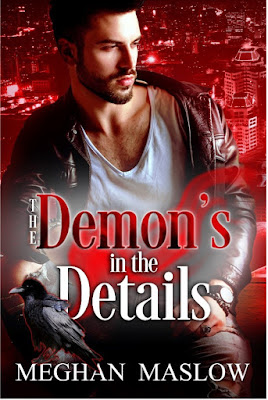 Can a sexy demon really spin straw into gold?

Poe Dupin, raven shifter and thief extraordinaire, is in trouble with a capital ‘T.’ Not only did he get his wing caught in the cookie jar during his latest heist, but his loser stepdad, the alpha, seems determined to run their roost into the ground. And Baltimore is many things, but forgiving is not on the list.

When his stepdad puts the roost in peril, Poe sees no choice but to bargain with Charm City’s only demon, Tommy Tittoti. Rumors are that Tommy eats the souls of those foolish enough to try. Three strikes and you’re out. But really, Poe wasn’t using his soul anyway. And if it saves his roost? Worth it.

Tommy isn’t what Poe expects. Demon—huge, horned, hairy, and scary, right? Nope. Blond, gorgeous, with a bubble butt, and a lilting drawl that beckons Poe to come play. Total hookup-app fantasy material. Even if he is a murder twink.

Poe’s no angel, but Tommy . . . well he’s more devil than demon. Yet, Poe just can’t seem to keep his feathers out of the fire. As one bargain turns into two, and then a third tragedy strikes the ravens, Poe finds himself falling for a guy who may very literally be the death of him. Or maybe the flames will burn them both.

The Demon’s in the Details is a fast-paced, roller coaster of a romance with a guaranteed HEA and lots of steam. Shenanigans include: a gold object that is definitely not a ring, a best friend who’s trigger-happy, and a demon who’s got a few surprises up his, uh, sleeve.

Tommy is an adorable demon/bloodthirsty murder twink (and OMG doesn’t that just paint the most vivid picture!) who’s built his own little kingdom in between several mob bosses who lead their own paranormal groups: vampires, fairies, shifters, and the major bad guy is a basilisk who can turn people to stone, genius!

Poe is a raven shifter who’s just trying to get by in spite of his looser stepfather who’s the roost alpha with a gambling addition.  He takes “recovery” jobs moving valuable items from one owner to another.  Poe ends up needing a favor from Tommy to save his roost.

There is a bit of an info dump in the first chapter explaining the characters and structure of this world, but once you’re past that the adventure begins!  The connection between Tommy and Poe is hot AF, but not to the detriment of the story line.  Tommy’s painted as a scary demon who traps unsuspecting victims, but is really a guy doing his best to serve his nature while balancing the rules of this realm.

Heat: 7/10 (just right, well balanced to add to the story and relationship without being smut)

Length: 7/10 (definitely could have been longer!)

Editing: 10/10 (I didn’t notice any mistakes or typos, which is unusual)

Meet cute: 9/10 (creates the right circumstances for attraction and enough reason to resist the relationship without the ott conflict usually found between two MCs)