I can't seem to get enough of Isla Olsen's characters!  Set in the same world as her Love and Luck Series, Mr. Right Now is the second book in the Suits and Sevens Series... 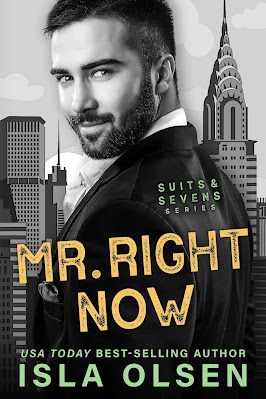 Where is here, exactly?

The short version—the Wattleglen Inn on Long Island, where my roommate’s billionaire brother has roped me into pretending to be his boyfriend for a family wedding weekend. All because I happen to have the same name as the ex his family still thinks he’s dating.

The long version—a ton of questioning, fantasizing, and giving in to temptation after being on the receiving end of the most epic BJ I’ve ever had in my life.

Sullivan Stapleton is the last person I should be getting involved with; he’s on the rebound, he’s a guy, and he’s a freakin’ billionaire who never saw a problem he couldn’t throw money at.
But I can’t turn down the cash he’s offering to be his fake boyfriend for the weekend; not when I’m in dire need of funds to repair some storm damage to my auto-shop.
And then after the wedding…well, I should walk away. But for some reason I just can’t seem to let go.

My review:
This book delivers what I've come to know about Isla Olsen's writing style and that means - fun and interesting characters who are interconnected with her other books and a few laughs, a few huh moments and some swoony lovemaking to bring two guys together - in this case Drew and Sullivan, who start out as strangers and quickly find the simmering inferno!
This was an easy, quick and quirky read and I highly recommend checking it out!  I feel it can be read standalone, but you'll understand the friend cameos better if you've read the first book and the Love and Luck Series as well.

I received an ARC copy of this book, however I've already re-read it through Kindle Unlimited as well to support the author.