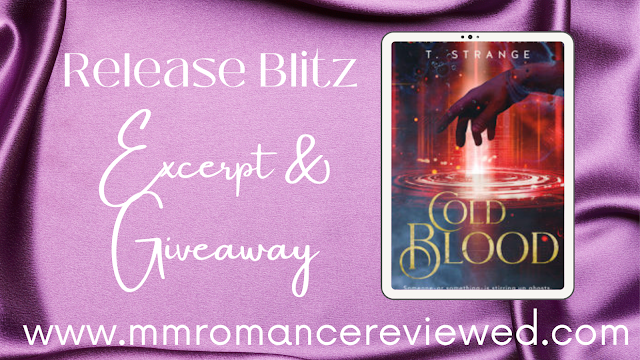 Book 2 in the Bound to the Spirits series 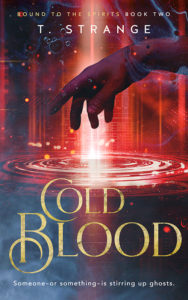 Ghost wards are failing. Mediums are vanishing. Someone—or something—is stirringup the ghosts of Toronto. It’s up to psychic medium Harlan Brand to find out why.

After defeating a serial killer who could control ghosts, psychic medium Harlan Brand is feeling much more confident in his abilities working for the Toronto Police Service with his partner, Hamilton, as they protect the city from dangerous spirits.

He is expanding his social circle, however reluctantly, to include the other police mediums and Morgan Vermeer, another graduate from the Centre—a school for training psychic children.

Hoping to find answers about Charles’ power and the serial killer, Harlan returns to the Centre only to find that one of its ghost wards—magical symbols that spirits can’t cross—is broken, and it’s a mystery as to how and why.

The calm and order that Harlan has been building up in his life are shattered when wards start failing across the city and mediums begin to disappear, including one of his new friends and a student from the Centre.

Someone—or something—is stirring up the ghosts of Toronto.

Reader advisory: This book contains scenes of violence and murder. It is best read as part of a series.

Hamilton sighed as he lowered himself into the driver’s seat of their police cruiser, settling in much more heavily than usual. “Matthew wants to meet you.”

Harlan was relieved that he was already struggling with his seatbelt. It gave him a moment to think about what Hamilton had just said.

Matthew? Do I know a Matthew? Hamilton’s—and, by extension, Harlan’s—sergeant was named Matthews, but Harlan had already met her.

The seatbelt clicked into place. He was out of time.

Hamilton sighed again, this time with an edge of laughter. “Matthew is my…” He mumbled something Harlan couldn’t make out. “You haven’t met him,” he added in his regular speaking voice.

Harlan waited, hoping Hamilton would elaborate, repeat himself or that the words would finally click into place as he ran them over and over in his mind.

Silence. Silence that he had to break if he was going to get anything else.

“Boyfriend!” Too loud this time, loud and sudden enough that it startled Harlan. “Matthew is my boyfriend. He wants to meet you.” Hamilton slid his gaze over to Harlan, a sly smile on his thin lips. “You can say no,” he added, making it clear he would prefer that.

Harlan would prefer that as well, so it worked out nicely.

Before Harlan could assure him that he was, of course, in complete agreement, Hamilton shook his head and sighed for a third time that morning. “Nah, I think we’re past that. At this point, it would just be a delaying tactic. He’s made up his mind.”

Harlan glanced sideways at Hamilton. Is Hamilton actually blushing? He hadn’t thought Hamilton was physically capable of doing that, never mind imagined that it might actually happen.

“And I’ve met your boyfriend,” Hamilton shot back, even though Harlan hadn’t spoken.

Technically true, but they hadn’t exactly met over dinner or another social event. Did life-and-death situations count more or less than sitting down for a meal together?

“And, by the way”—the blush Harlan had probably imagined was gone, and Hamilton was definitely smirking now—”I knew I recognized him from somewhere.”

Hamilton opened his mouth, started to say something then seemed to reconsider when he saw Harlan’s pained expression. “I’m glad you’ve got someone,” he said, just as gruffly as usual, but with a hint of genuine fondness and even warmth. “You don’t have a lot of people.” He looked away while he took a left-hand turn, then laughed. “Of course you’d meet someone on the job.”

Harlan looked down at his lap. Yeah. It was pretty pathetic. Sure, he’d started going to the occasional police-medium group—basically a coffee klatch, not everyone sitting in a circle sharing their feelings the way he’d been dreading—but that was still connected to the police. He hadn’t even realized that Charles had the same connection. Fuck. Somehow, without realizing it, he’d become one of those adults who only lived for his job.

He blinked. Maybe it isn’t just me.

“What does Matthew do?” he asked, fully expecting he already knew the answer.

“He’s an advertising consultant.” Hamilton shrugged. “I don’t know what that means, either.” He paused, then added, as though he’d read Harlan’s mind—more likely his expression—“I did meet him through a case, though.”

Harlan wasn’t sure if that made him feel better or worse. He didn’t know exactly how old Hamilton was, but he guessed his police partner was at least a few years older than he was. Was that what he had to look forward to—all his personal connections coming from his work for the rest of his life? He wasn’t sure why it bothered him, but it did. Maybe it was like that for everyone, and he just didn’t know—not that there was anyone he could ask.

Maybe Charles… He’d met a few of Charles’ friends, more or less in passing. He certainly hadn’t sat down and had dinner with any of them, the way Hamilton seemed to be proposing that he do with Matthew. He’d always assumed it was because he and Charles were still fairly new as a couple and—knowing Harlan—Charles hadn’t wanted to overwhelm him with a bunch of people all at once—but maybe he’d been wrong. Maybe he just didn’t want to introduce Harlan to anyone else in his life.

Knowing he was starting to spiral, he was relieved when Hamilton continued.

“I told him you don’t do phone calls and you wouldn’t want to text someone you don’t know”—Wow, Hamilton really will make a great detective one day—“so you can just let me know when you decide. Here.” He fished a piece of paper out of his breast pocket and handed it to Harlan. “This is Matthew’s number so you can give it to Charles. He’s invited too, if he’d like.” His smirk was back. “I think he still has a choice, unlike you.”

“Where are we going today?” Normally Hamilton didn’t tell him, and he didn’t ask, but it was the only change of topic Harlan could think of. “Is it another one of Samuel’s ghosts?” Killing the warped medium and serial killer Samuel Harkness had released most of the spirits under his control, but even eight months later they were still finding stragglers, like the ones that had led Harlan to their killer in the first place.

Interestingly, Harlan and Hamilton had found—and freed—almost three times as many wanderers as the other three medium pairs put together. It was as if even though he’d never met them, these spirits felt a connection to him for killing the man who had been controlling them.

This part of the job was a lot less glamorous when the ghosts they worked with weren’t leading him to a serial killer.

“Kid,” Hamilton had laughed after a sweaty, dusty and frustrated Harlan had snapped something along those lines after a very long, hot day crammed in the crawlspace of an old house, trying to coax an especially nervous ghost close enough for him to either grab or calm it down enough for it to cross over on its own, “that’s the job. It’s not bringing down bad guys and epic showdowns. It’s…this. Hey, you’ve got a cobweb on your face.”

Harlan couldn’t help feeling that he’d peaked too soon, experienced more police-medium excitement than most of his colleagues got in a lifetime.

He still liked his job and found it fulfilling, rewarding and blah blah, but he couldn’t help feeling a little…let down. Restless, maybe. Not that he wanted to face anything like Samuel ever again! But…something. Something more than finding ghost, freeing ghost, next. Day in, day out, week after week. Just a little.

“Nah. Well—not as far as I know,” Hamilton amended. “Though apparently this is kinda a weird one.”

Harlan couldn’t help brightening, sitting forward in his seat a little. In light of what he’d been thinking, ‘weird’ was good. “Really?”

“Yeah, yeah, keep it in your pants.” Hamilton laughed.

“You gonna tell me or is it gonna be a surprise?” Even a few months ago Harlan wouldn’t have dared ask for information about the scene they were going to, and he certainly wouldn’t have expected an answer.

Now, it was almost like a game between the two of them—if Harlan really wanted to know, Hamilton would tell him, and if Hamilton really wanted to keep him in the dark until they got there—and Harlan was beginning to think that, sometimes at least, walking in without any preconceptions was helpful—he wouldn’t. And, occasionally, Hamilton himself knew very little or nothing about the haunting situation. Harlan was starting to suspect that was one of the reasons Hamilton hadn’t filled Harlan in ahead of time in the past. Hamilton didn’t like admitting when he didn’t know something.

“Mmm, this time I think I’ll let you see for yourself. Besides, we’re almost there.” Hamilton pulled up beside a record store, one of those hipster places that had been popping up in the most gentrified parts of the city. He got out, coming around the other side of the car and opening Harlan’s door when he didn’t get out immediately.

Harlan stepped onto the sidewalk to take a better look around. Hauntings—the ones not related to violent crime, which he doubted was the case here—tended to be in residential buildings. People died where they lived, not where they bought vinyl.

He glanced across the street—more shops, and they didn’t look like they had apartments over them. Neither did the record store or the others around it.

“I can double-check the address if you’d like,” Hamilton offered, smirking a little.

“No. That’s fine.” As far as Harlan knew, Hamilton had never got an address wrong.

Maybe the dispatcher had been wrong?

A young white man stepped out of the shop, waving at them. “Are you with the Graveyard Crew?”

It was a nickname for Toronto police mediums that Harlan didn’t really like—and, by the look on Hamilton’s face, he didn’t care for it either.

Hamilton pointedly glanced down at his uniform and badge. “We’re with the police.”

“Oh, good! C’mon in. We’ve been expecting you.” He turned and disappeared into the shop.

Hamilton shrugged one shoulder, extending a hand to say after you.

He was suddenly hit by a barrage of noise—apparently the door was surprisingly soundproof. Harlan always thought the music in these types of places sounded bad, but this was bad.

Hamilton, never one to fuck around, headed straight to the man who’d welcomed them. “Can you turn the music down? Or off, maybe?” He had to raise his voice to be heard over the din.

The man shook his head. “No! That’s the problem.” He didn’t have Hamilton’s loud ‘cop voice’ and he was practically screaming. 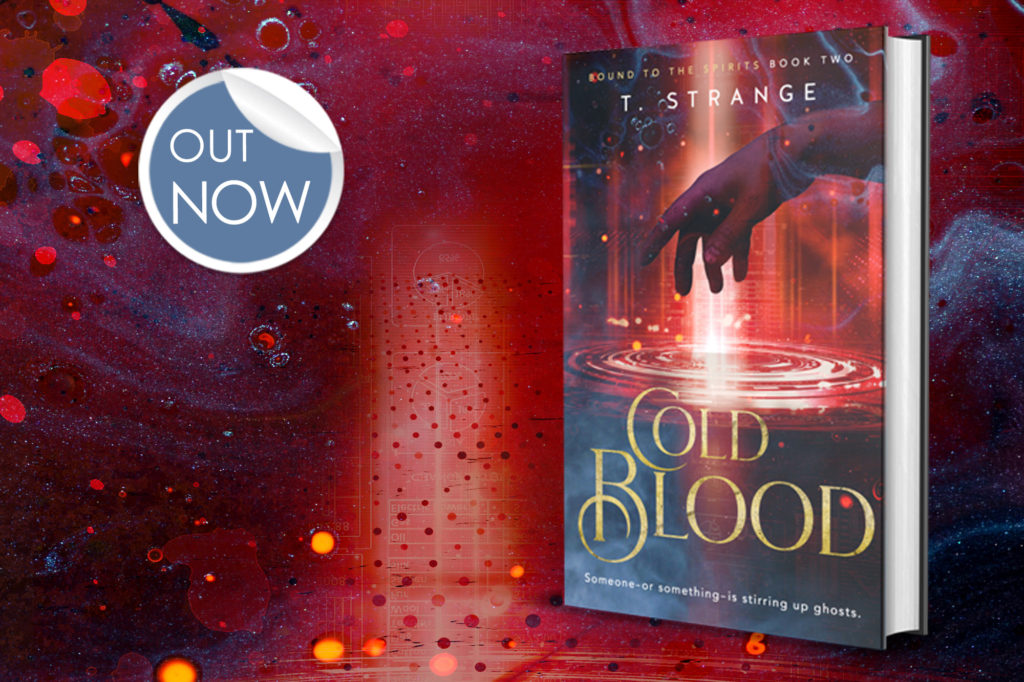 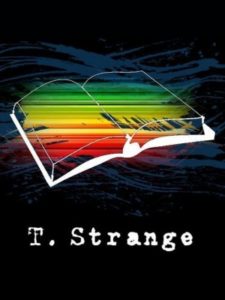 Enter for the chance to win a $50.00 First for Romance Gift Card! Competition hosted by Totally Entwined Group.

Check out Amy_tbs' Review of Cold Blood by clicking on the graphic below: 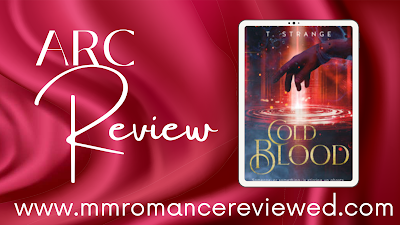