This is a meet cute we have all read before. You have a one night stand with someone you never think you will see again and then you see them again. Only in Hot Boss the person ends up being your boss. Your very sexy and hot boss. 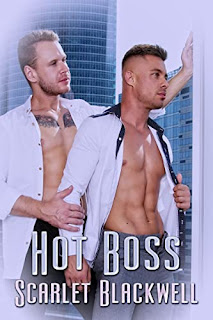 His new boss is the hot stranger he tangled with the previous night. Office romances are forbidden, but neither of them can keep their mind on the job...
Two strangers come together for hot, passionate sex one lonely night in a bar. The next day, Nathan Wright discovers that his new boss is none other than his anonymous partner of the night before. Sasha Ronan is hot, rich and head of the most powerful law firm in the city. He also doesn’t believe in mixing business with pleasure and tells Nathan in no uncertain terms that their illicit dalliance must be swept under the carpet.
Nathan, desperate to make partner, fears for his future, but other forces are at work. Try as he might, he can’t forget the night he spent with his forbidden lover...
Lindz' Review:
For Nathan Wright finding out the man he slept with the night before is his boss puts him in a situation he never thought he would find himself in especially when all he wants to do is make partner, but you wonder as you read this book if he will have enough luck on his side to do just that.
Sasha Ronan has everything he could ever want. He’s hot, rich and the boss of the law firm Nathan wants to make partner at. Their one night of skin melting hot sex in the bar bathroom could be something more, but they both have obstacles to over come to make that happen. Sasha admits Nathan is what has gotten his manhood going and staid going for 8 days during a heated confrontation and at that point you finally start to realize that Sasha is willing to embarrass himself for Nathan.
But then Sasha goes and makes a stupid move putting what might be thought as the end of the two of them ever being a possibility.
You will come to love the supporting character Queenie as it’s impossible not to do so. You will have to read the book to find out how these men get their happy ever after.
Hot Boss was the first book I have read of Scarlet Blackwell, but it wont be the last as this book was just that good.
Rating: 5 Stars
5 Stars Boss Lindz One Night Stand