on October 28, 2021
Originally published in April of 2018, The Mason Jar is a light, fun fairly quick read to add to your TBR pile! 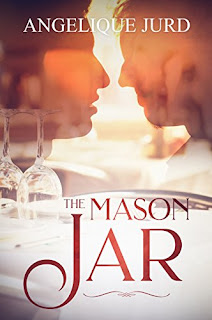 The Blurb:
A cocky Hollywood celebrity, in trouble with his studio again.
A grumpy diner owner who likes his quiet life.
A meddling reporter determined to get a scoop.
And... a bear.
Flamboyant, arrogant, and no stranger to scandal, Rian Johns is as well known for leaving a mess behind him as he is for acting. When the police and the media catch him stoned and with his pants around his ankles, his manager sends him away to cool off and sober up.
How much trouble can he get into in a small village on the Oregon Coast?
After the death of his son's mother, Mason came home to Cliffport to raise him. Owner of a small bar and grill, Mason has spent his time focused on his son and his business. Now, as he prepares for  Jake to leave for college, Mason enjoys a quiet life and likes it that way.
Right up until Rian Johns shatters the quiet, dragging Mason into a summer fling that is anything but calm. As the summer ends the two are forced to face the question: is it really just a fling? How can it possibly be more when they lead such different lives?
Excerpt:

“That was insane down there tonight.”
Mason drops into his armchair with a sigh of relief. He scowls when Jake grins at him around a mouthful of lemon meringue. “How many times did someone tell you about the new celebrity in town?”
“Shut up.” Mason pushes the pie around the foil plate. Why is everyone so interested in his private life? It’s not like he’s the only gay man in town.
“Want to bet?”
“Oh, come on, I am not,” he protests. He drinks his beer, staring at the television screen without seeing.
“Well you’re sure as hell the only out business owner around here,” Jake points out. He flicks the channel to a basketball game and settles back against the sofa cushions. “Besides, how often do we get someone like Rian Johns in town? They’re just hoping they’ll get to see him around and they probably figure you’re their best chance.”
Dropping the pie plate on the ground, Mason hooks the foot stool with the toes of his right foot and pulls it closer. Stretches his legs out with a sigh. “Well they’re going to be disappointed.”